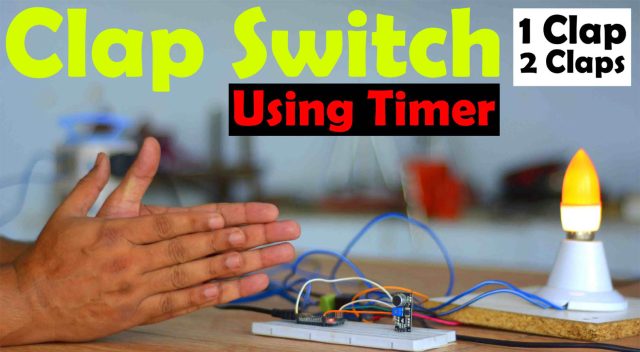 Arduino Clap Switch | Arduino Clap ON Clap OFF light | Clap Light- In this article, you will learn how to make a Clap Light Switch using Arduino, a sound sensor, a one-channel relay module, and a 110/220Vac bulb. Guys, I am perfectly sure that almost 90% of electronics hobbyists, designers, and programmers might have essentially designed a clap switch in the start. Myself, when I was doing my engineering degree, I designed a clap light switch after learning basic electronics, and at that time I really felt thrilled and so ecstatic.

You will come across so many projects related to Arduino clap switch or Arduino clap ON, clap off a light switch. While some people tend to control light through the usage of a single clap or double claps purely through the application of electronic circuits by means of using 555 timer IC. So, it totally depends on you whether you want to use a programmable controller board like Arduino or you plan to design a clap switch using only electronic components.

If you go with a purely electronic circuit, then as a beginner future modifications will be very hard for you, as you will have to solder and desolder different electronic components. And obviously, if you go with the Arduino then you will only have to make changes in the code. Today I will practically demonstrate how an inefficient clap switch can be converted into an efficient clap switch, only by adding a few lines of code.

Anyway, without changing the hardware, we can control light using one clap, we can also control the same light using two claps, and we can also control light by using 10 or ever-larger number of claps. How can this be possible, I will explain it to you in programming. So, what I want to say is that it depends on you, how many claps do you want to use to turn ON or turn OFF the light switch.

Controlling a light or any other electrical load with one clap or two claps isn’t really hard, but, the challenging part is, how to make it efficient? Well, for this purpose I have written two codes, the first one is a simple code without the use of a timer and then in the other code I have added a timer. I will practically test it and you will see the difference by yourself. 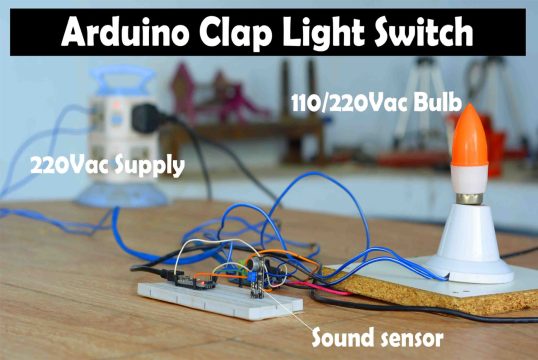 Through this Arduino clap switch, you are able to control any AC / DC load. As a beginner, you can start with a small LED, or you can use any small DC motor, or you can control 110 / 220 VAC light just like me.

Guys, if you want to use 110 / 220 Vac, pay due attention to the safety factor, because such a high voltage can even lead to fatal incidents. Protective gloves are necessary to be worn while using 110 / 220Vac, otherwise while conducting such experiments, somebody must accompany you as a precaution. Let’s now move on to start our practical demonstration.

First, I am going to start by controlling this light using a single clap without using a timer. As you can see I have powered up the Arduino and I have also connected 220Vac. Remember, never touch the relay contacts when the 220Vac is connected. 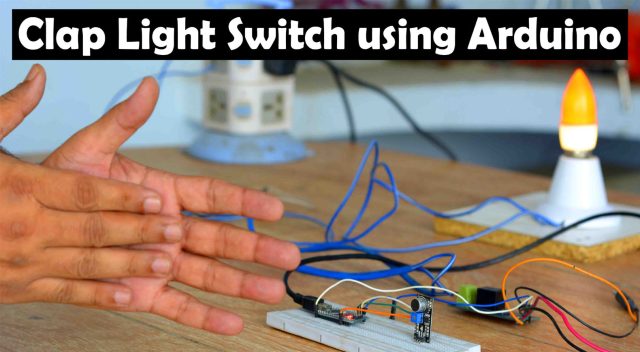 Now you can see (watch the video given at the end of this article) how easily we can convert an inefficient type of clap switch into an efficient clap switch through the application of a timer. You can even use a single clap light switch in your room, and it is supposed to work perfectly well… Its programming has been undertaken in such a fashion, that Arduino monitors clap duration with the help of a timer, and besides this, it also counts claps. So, in case there are more than two claps, the light will not turn ON / OFF. Now, let me demonstrate a two claps light switch. 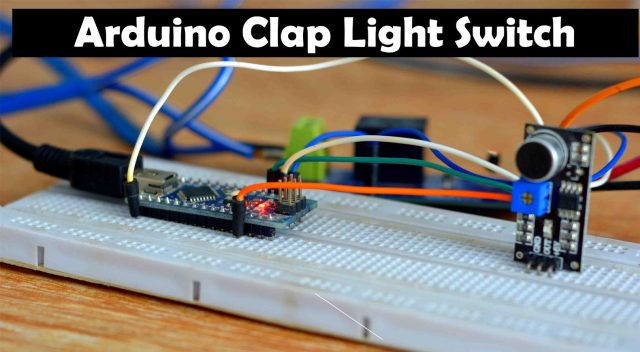 You can see that it is the same circuit, however, I have carried out some modifications in its programming. I have also used a timer this time round, which counts claps. And, besides this, it also monitors the duration between any two claps. When the first clap is detected and after this, the second clap is also detected after a certain duration, then the light will turn ON / OFF. 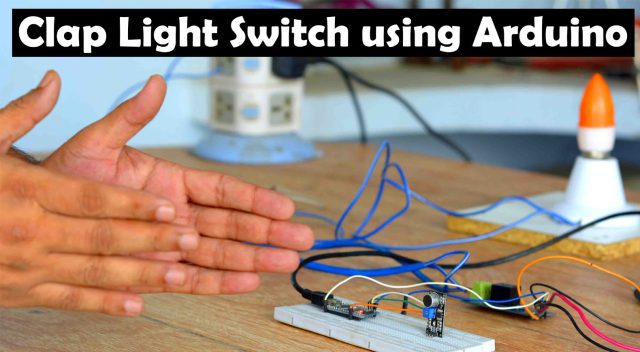 If you take just one clap and keep a relatively large interval in the second clap, then the light will not turn ON / OFF. So, you can see (watch the video tutorial given at the end) how we can successfully design an efficient clap switch by means of using Arduino and a KY-037 or Xcluma sound sensor.

This two-clap light switch seems quite practical to me because it is not affected and it doesn’t turn ON / OFF by any random sound. I am sure by now you might have got an idea of how does this system work. So, without any further delay let’s get started!!!

Altium Designer is the world’s most trusted PCB design system. Altium Designer enables engineers to effortlessly connect with every facet of the electronics design process. Over 35 years of innovation and development focused on a truly unified design environment makes it the most widely used PCB design solution. With Altium Designer you can create PCB designs with an intuitive and powerful interface that connects you to every aspect of the electronics design process. Route it your way through any angle, tune for the delay, Push, Slide, and Walkaround faster than ever. Interact and collaborate with mechanical designers like never before in a photo-realistic, 3D design environment. If you want to get started with the Altium designer, you can click on the get started. 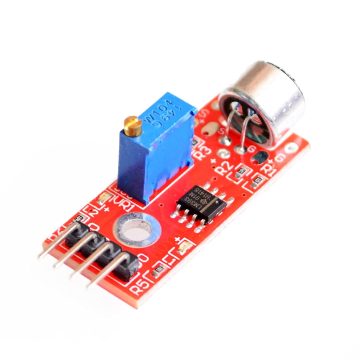 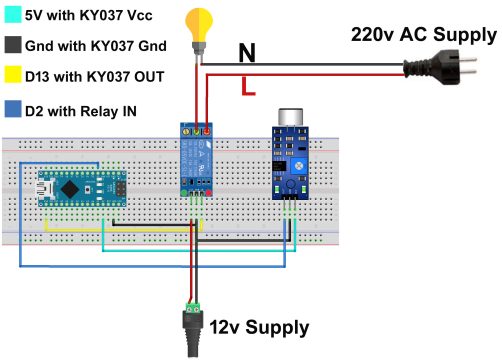 In the above circuit diagram, I have an Arduino, a sound detector sensor, a relay module, and a 110/220Vac Bulb. I connected the digital output (OUT) of the KY037 with the digital pin D2 of the Arduino Nano. The sensor itself has an LED that lights up when sound is detected. The ground and VCC pins of the sound sensor are connected with the ground and 5v pins of the Arduino.

Since we are using a relay, so we can use any load, it can be an AC load or DC load, make sure the load current rating does not exceed the relay contacts current carrying capacity. By the way, the type of the relay I am using is of the type SPDT “Single pole and double throw”. Now, let’s take a look at the programming.

I simply started off by defining the pins to which the sound sensor and relay module are connected. I also defined a variable for storing the relay status.

Inside the setup() function, I activated the Serial communication for debugging purposes. I set the Sensor as INPUT and relay as OUTPUT using the pinMode() functions.

Now, the actual code is inside the loop() function which runs repeatedly. So, first I read the relay pin status if it’s ON or OFF and store it in the variable relay_status. Next, I check if any sound is detected then toggle the relay pin. I am telling you one more time, that this code is very inefficient, but as a beginner, you can start with this code. Let’s take a look at the code of one Clap light switch using the timer.

I modified my previous code and I also defined some other variables. The code inside the setup() function remains unchanged.

If clap is already greater than 0 and millis() – clap_range >= 50 then store then current millis() function value in clap_range and at the same time we also increment the clap variable.

Then these other if conditions check the time duration and the number of claps. So, if in the same time duration only 1 clap is detected then turn on the relay otherwise turn off the relay and store 0 in the clap variable. Now, let’s take a look at the code of two claps light switch.

This code is 99% similar to the one clap light switch code. The only difference is, as this time I am controlling the light using two claps so that’s why this time I am using if clap == 2 and that’s it. Now, you can easily modify this code to control a light using more than 2 claps.