Other tools and components

What is K-Type Thermocouple? 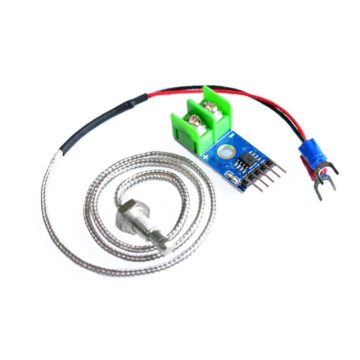 A type K thermocouple is a temperature sensor made of two different metal wires, usually nickel-chromium and nickel-aluminum, that are joined at one end. When the junction between the two wires is heated or cooled, a small electrical voltage is generated that can be measured and used to determine the temperature at the point of measurement. Type K thermocouples are widely used in industrial and laboratory settings because they are relatively inexpensive, accurate, and can measure a wide range of temperatures.

Working principle of the thermocouple

In a thermocouple, there are two different wires connected. This is because if the materials of the two wires are the same then there will be no electronic differences that can be detected as voltages. It’s the same as how the battery works where we can find out the battery voltage by installing a multimeter on the two poles, namely the positive and negative poles.

Type K thermocouple is the most common type of thermocouple used in various industries, for example the oil and gas industry because of its wide reading range and relatively affordable price. These thermocouples are sometimes called chromel–alumel thermocouples.

This type of thermocouple can be used to perform higher temperature measurements compared to the use of type K thermocouples and has better repeatability in the temperature range of 300 °C to 500 °C. This type provides many advantages over the R&S Type at almost a tenth of the cost, making it a popular alternative to thermocouple options.

Type R thermocouple has the same application as type S thermocouple but has better stability compared to type S so this type of thermocouple tends to be used as a reference for type S.

Type S thermocouple has the advantage that it can be used at a temperature of 1450 °C.

This type of thermocouple is rarely used for industrial applications and tends to be used in laboratories. 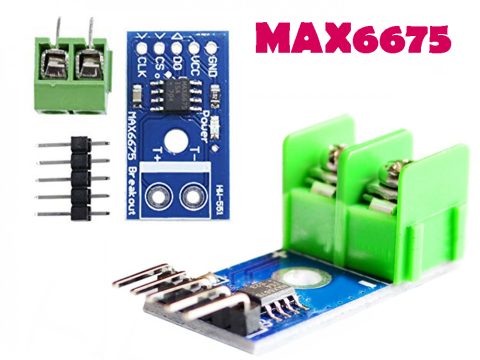 The MAX6675 Amplifier is an integrated circuit that amplifies and digitally converts the small voltage generated by a thermocouple into a digital output. It is specifically designed to work with K-Type thermocouples, which are widely used temperature sensors in industrial and laboratory settings. The MAX6675 Amplifier provides a convenient digital output that can be easily read by microcontrollers, making it ideal for use in temperature control and monitoring applications.

One of the main advantages of the MAX6675 is its high accuracy and wide temperature range, which can measure temperatures from -200 to +700 degrees Celsius with a resolution of 0.25 degrees Celsius. It also has a built-in 12-bit analog-to-digital converter, and it communicates with a microcontroller via the SPI bus. It needs a power supply voltage of 3.0V to 5.5V DC.

The MAX6675 Amplifier also has a thermocouple cold-junction-compensation feature which allows it to measure the accurate temperature without the need of a separate sensor. This feature makes the MAX6675 a very compact and low-cost solution for temperature measurement.

The MAX6675 Amplifier is widely used in a wide range of applications such as in industrial process control, temperature measurement in scientific experiments, medical equipment, and even in food processing. It is also a popular choice for hobbyists and DIY enthusiasts due to its low cost and easy-to-use nature.

Overall, the MAX6675 Amplifier is a powerful, accurate and convenient solution for temperature measurement and control, it can be easily interfaced with microcontrollers and other digital devices, and it’s widely used in a wide range of applications, making it a great choice for a variety of projects and applications.

The technical specifications of a K-Type Thermocouple with MAX6675 Amplifier include:

The LM75 and a MAX6675 K-Type thermocouple are both temperature sensors, but they operate in different ways and have different characteristics.

The LM75 is an integrated circuit that uses a small amount of power to measure temperature using a built-in thermistor, which is a resistor that changes resistance with temperature. The LM75 is a digital sensor, meaning it outputs a digital signal that can be read by a microcontroller or other digital device.

A MAX6675 K-Type thermocouple, on the other hand, is an analog sensor that generates a small electrical voltage at its measurement junction that changes with temperature. This voltage is then measured by a device called a thermocouple reader, which converts the voltage into a temperature reading.

The SSD1306 OLED display is a small, low-power display that uses organic light-emitting diodes (OLEDs) to display text, images, and other information. The display is controlled by a driver IC (integrated circuit) called the SSD1306, which communicates with the host device (such as a microcontroller or computer) over an interface such as I2C or SPI.

The OLED display has several advantages over other types of displays, such as:

The SSD1306 OLED display is commonly used in small projects like wearable devices, portable devices, and other devices that require a small, low-power display.

The SSD1306 OLED display is a small and low-power device that can be used to display text, graphics, and other information on a small screen. It is typically controlled by a microcontroller, such as an Arduino, and can be connected to the microcontroller through a variety of interfaces, such as I2C or SPI. There are libraries available for various programming languages that make it easy to control the display and display information on it.

To install the SSD1306 OLED library and MAX6676 K-type thermocouple library, you can typically use the library manager built into the development environment you are using. For example, in the Arduino IDE, you can go to Sketch > Include Library > Manage Libraries, and search for the libraries by name. Once you find the libraries, you can install them by clicking the “Install” button. 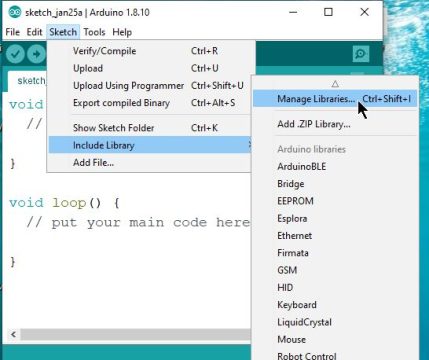 In the library Manager window, search for your required libraries by name, so for this project, I am installing the  SSD1306 OLED display and max6675 libraries. 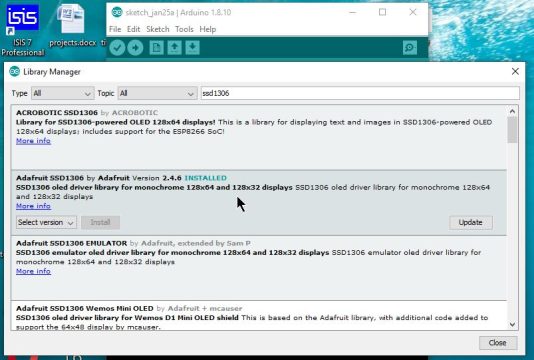 Select the required library and click on the install button. But in my case, I already installed it so it shows me the update button instead of install.

Repeat the same steps for the max6675 amplifier library 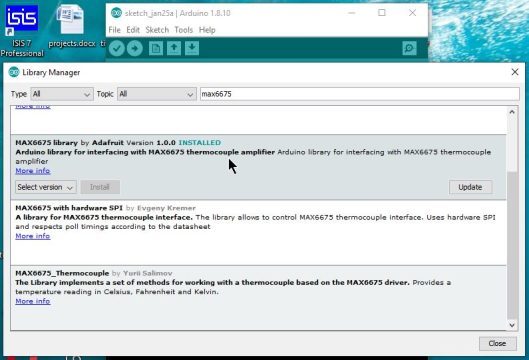 So, that’s all about the libraries installation. 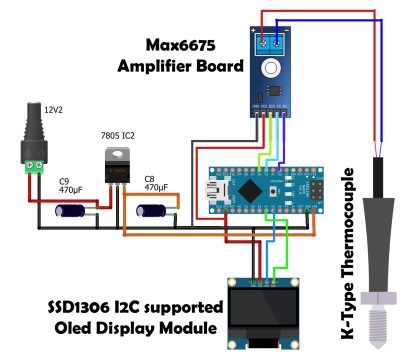 On the Left side, you can see a 5V regulated power supply based on the most popular linear voltage regulator 7805. This power supply is optional, because you can also use your laptop or computer to power up your Arduino board. But its good to have this 5V power supply. So, that’s all about the circuit diagram.

#include <Wire.h> // you don’t need to download and install this library

As you can see I connected all the components as per the circuit diagram. 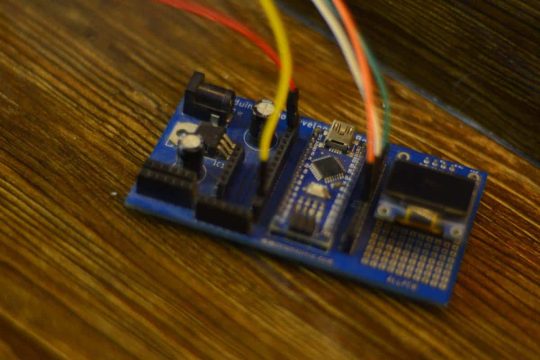 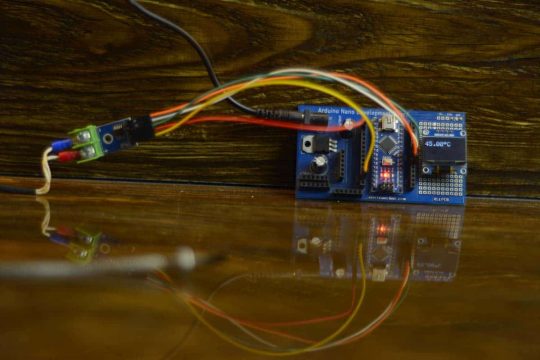 I applied some temperature on the k-type thermocouple sensor 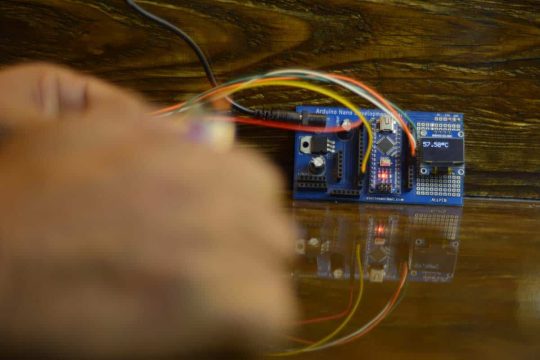