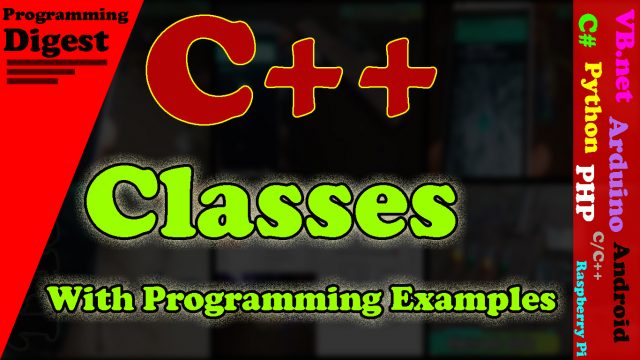 C++ Class- The most important feature of the C++ programming language is that it supports object-oriented programming (OOP). In OOP, the computer program is divided into objects. OOP language is an easy and flexible approach for designing and organizing the program. The program is designed by using classes. In this article, the concept of objects and classes has been discussed.

Classes are defined to create user-defined data types. These are similar to built-in data types available in all programming languages.

The definition of a data type does not create any space in computer memory. When a variable of that data type is declared, memory space is reserved for that variable. Similarly, when a class is defined, it does not occupy any space in the computer memory. It only defines the data items and the member function that can be used to work upon its data items. Thus defining a class only specifies its data members and the relationship between the data items through its functions.

A class is defined in a similar way as a structure is defined. The keyword “class” is use to define the class. The general syntax to define a class is

Body of the class

It is the keyword that is used to define a class.

It represents the name of class. The objects are created by this name. the rules given the name of a class and a variable are same. Any word that can be a variable name in a C++ program can be a class name.

The body of a class consists of the data items and the functions. These are called members of the class these are written between braces.

The body of a class ends with a semicolon.

Data member of a C++ class:

The data items of a class are called data members of the class. For example, a class that has four integer type and two float type data items is declared as:

Member Functions of the C++ class:

The commands that determine whether a member of a c++ class can be accessed from outside the class or not are called member access specifiers.

Normally two types of member access specifiers are used. These are:

The members of a class that can be accessed only from within the class are called private members. They cannot be accessed from outside that c++ class.

Making a data to be accessed from within the class is called data hiding, i.e. the data declared as private is hidden from outside the c++ class.

Example how to use private and public access specifier in c++:

In the above example, the c++ class has been defined its name is “cdate”. It has three data members y, d, and m of int type and has been declared as private. These data members can only be accessed from inside this class.

In the above example, the class has been defined its name is “converter”. It has two data members feet and inches of int type and has been declared as private. These data members can only be accessed from inside this class.

Example how to use more than two objects to access the data item of the class:

Differences between a structure and a C++ class: