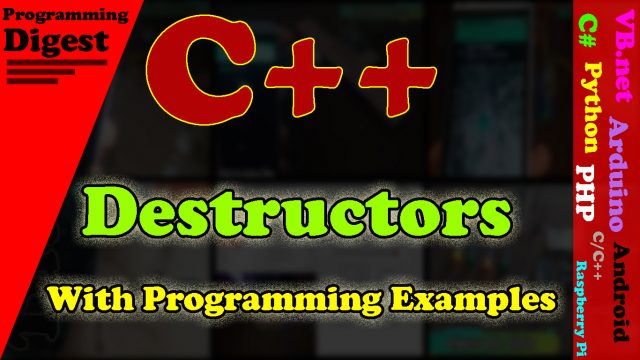 Like constructors, C++ destructors do not return any value. They also do not take any arguments.

Similarly, global objects (objects that are declared before the main function) or static objects are destroyed at the end of the main function. The lifetime of these objects ends when the program execution ends. So at the end of the program, the destructor function is executed. The C++ destructor functions are commonly used to free the memory that was allocated for objects.

The following example explains the concept of constructors and destructors.

Example how to use C++ constructor and C++ destructor:

Example how to use passing objects as arguments in c++ destructor:

In the above program, the class “data” has one data member “name” of string type and two member function “get_data” and “show_data”. The  “show_data” function has an argument of class “data” type.

In inheritance hierarchies, the declaration of a virtual destructor in the base class ensures that the C++ destructors of derived classes are invoked properly when an object is deleted through a pointer-to-base-class. Objects that may be deleted in this way need to inherit a virtual destructor.

A C++ destructor should never throw an exception

Difference Between Constructors And Destructors:

A constructor, in programming, allocates the amount of memory to the program that the object needs to take up for as long as it is useful. It essentially constructs a new object in memory…and can maybe set values in the object, do some logic, etc. similar to any method. This is a pretty standard fixture in most object-oriented languages, such as Java or c++.

A C++ destructor is the opposite, it “frees” the memory used by your program for that object by deleting its values in memory and unallocating it to the application. It destructs (or unconstructs) the object from memory. This is not such a common fixture in object-oriented languages because much higher level ones have built-in data management schemes, so it automatically destructs objects as needed.