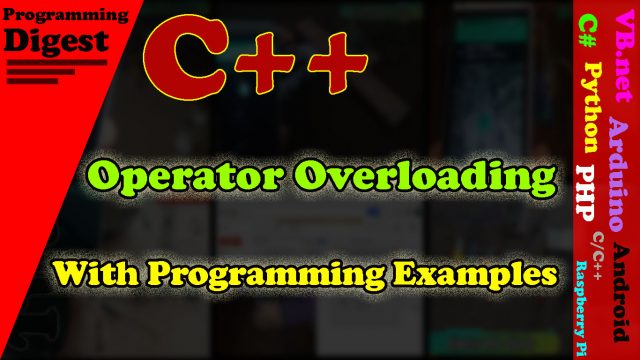 The feature in C++ programming that allows the programmer to redefine the meaning of operators when they operate on class objects is known as operator overloading.

Defining a new job for the existing operator with respect to the class objects is called operator overloading.

We can redefine or overload most of the built-in operators available in C++. Thus we can use operators with user-defined types as well.

Some of the important operators that can be overloaded in C++ are as follows:

The operators that cannot be overloaded are as follows:

Following are some important rules and restrictions on C++ Operator Overloading:

The general syntax to define the operator function is as follows:

It indicates the type of value returned by the member function. If function returns anything, then keyword ‘void’ is used.

It is a keyword of C++. It indicates the operator function.

It is the sign or symbol of operator that is to be overloaded.

In this program, the class temp has one data member ‘data’ of integer data type. It also has four member function getvalue() to get data from user, display() to display data, and two operator function that are used to overload addition and subtraction operator.

The values stored in objects obj1, obj2, sum, and sub of class temp are shown in the following figures:

Example write a program using class distance that creates an object and gets value from user in feet and inches. It then adds these values with the values of another object by overloading of + operator:

In this program, class string has a data member ‘str’ of string type. The member function input() takes string from user and function ‘print()’ displays on the screen. The + operator function concatenates the strings of both the objects.

In the main() function, two objects of class string type are created. The strings in data member ‘str’ of ‘s1’ and ‘s2’ are entered. These strings are concatenated (combined) using statement s3= s1+s2. The + operator function concatenates the string s1 and s2, and stores the concatenated string in s3.

The general syntax for overloading I/O operator is as follows:

It is a keyword of C++. It indicates the operator function. 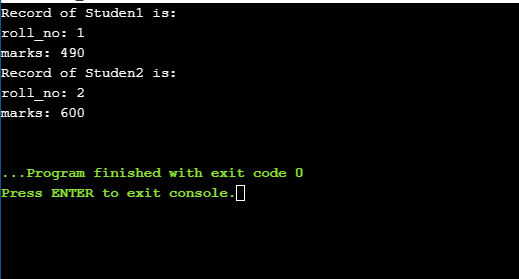 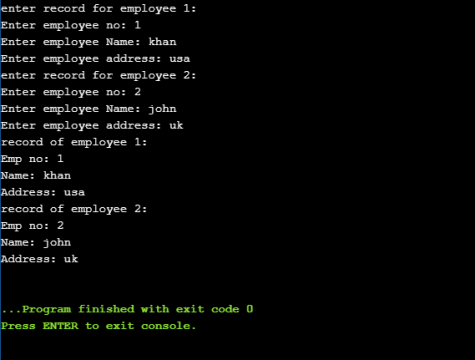 in this program, the class ‘distance’ contains two data members, feet and inches. It also contains an C++ Operator Overloading function which compares two distances and returns 1 if both of the values of data members of object 1 is less than the value of data member of object 2, otherwise 0.

In the main() function, two objects of class distance are declared. The statement d1<d2 calls the C++ Operator Overloading function and returns the value on the basis of the values of their data members.

Example write a program that compares the length of two string that either they are equal or not using overloaded comparison operator:

In this program, the class ‘mystring’ have two data members: str of string type and len of int type. The == operator overloading  function compare the strings length if they are equal then it returns 1 otherwise it returns 0.

In the main() function, two objects of class ‘mystring’ are declared. The statement “if(s1==s2) calls (invokes) the C++ Operator Overloading function and return value on the basis of the values of their data members. Because the length of these string is different, so value 1 (true value) will be returned.

All these operands are implemented in an identical manner. The unary operator operates on the object for which it was called. Normally, this operator appears on the left side of the object such as !obj, -obj, and ++obj but sometime it can be used as postfix as well such as obj++ or  obj–

The subscript operator is normally used to access array elements. This operator can be overloaded to enhance the existing functionality of C++ arrays.

Example write a program to explain the overloading of the subscript operator []:

In the above program, the class ‘saferarry’ has an array that is initialized the values equal to their index number in default constructor. The class has a subscript operator function that returns the value of the index of an array that is given as parameter to the function. It also shows a message on invalid index number.

In the above program, the class matrix has a data member of two-dimensional array data[4][4]. The class has a default constructor that sets all the values of all the indexes of the two-dimensional array to zero. This class has two C++ Operator Overloading functions for parenthesis operator, one of them take two parameters, row and column and returns the value to that index form the 2-D array, and second C++ Operator Overloading function has no parameter, it sets the array to zero, working the same way as default constructor.