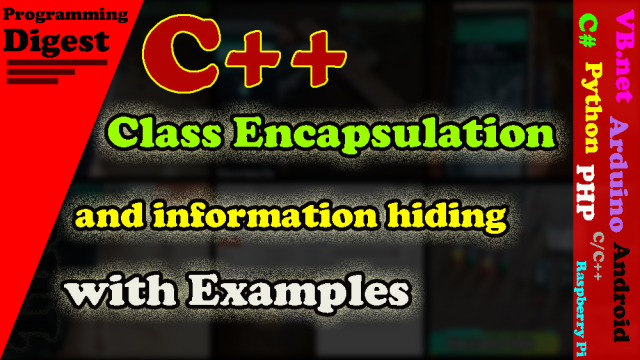 Separation of the public interface and private implementation

Class encapsulation and information hiding:- From the previous introduction, it is known that C++ implements encapsulation through classes, and seals data and operations related to these data. Installed in a class, in other words, the role of the class is to encapsulate data and algorithms in abstract data types declared by users. In object-oriented programming, when declaring a class, generally all data is designated as private, making it We are isolated from the outside world. Specify the member functions that need to be called by the outside world as public. Although it cannot be accessed directly outside the class Private data members, but you can reference or even modify private data members by calling public member functions.

The details of the implementation of these functions, and only need to know which function can be called to get what results, and what functions can be achieved. can. Just like using a camera, you only need to know that you can press the shutter to take a picture, without knowing the details of its implementation. A matter of designers and manufacturers. The shutter of the camera is a public interface, and the user uses the shutter to achieve the purpose of taking pictures. But the structure and function of the camera cannot be changed. All parts that are not related to user operations are encapsulated in the chassis, and users cannot See, can’t touch, can’t change, this is the separation of interface and implementation. Operating data members through member functions is called the realization of the function of the class. In order to prevent users from arbitrarily modifying the public Use member functions to change the operations performed on the data, often preventing users from seeing the source code of public member functions, which is obviously more It cannot be modified, and the user can only access the object code of the public member function (visit this article for details).

(1) If you want to modify or expand the functions of a class, you only need to modify the related data members of the class and its related components. Member functions, parts of the program other than the class need not be modified. For example:

Note: Although the data members in the class have changed and the definition of the member function display has changed, the external The interface has not changed, the outside world still accesses the data in the class through the public display function. Any other part of the program No need to modify. Of course, the function of the class has changed. When the display of the stud object is called, the student’s learning is output. Number, name, age, and gender values.

(2) If you find errors in the reading and writing of data in the class during compilation, you do not need to check the entire program, only check the access in this class Ask the few member functions of these data. In this way, the design, modification and debugging of programs (especially large programs) appear convenient and simple.

If a class is only used by one program, then the declaration of the class and the definition of member functions can be directly written in the program At the beginning, but if a class is used by multiple programs, the amount of repetitive work is very large and the efficiency is too low. In the development of object-oriented programs, the declaration of the class (including the declaration of the member function) is often placed in the specified header In the file, if the user wants to use this class, just include the relevant header file, and there is no need to write the class repeatedly in the program The statement in order to reduce the workload, save space and improve the efficiency of programming.

Because the examples in this textbook are relatively simple, for the convenience of reading the program, the declaration of the class, the definition of the class member function and The main function is written in the same program. In fact, a C++ program is composed of 3 parts:

(2) Class implementation files (with a suffix of .cpp), including the definition of class member functions;

For example, you can write two files separately:

(3) The main file. In order to form a complete source program, there should also be a source file including the main function: (Main function module)

The program can be compiled and linked according to the method of compiling and running a multi-file program. C++ compilation system Compile the two source files main.cpp and student.cpp respectively to obtain two target programs main.obj and student. obj, and then connect them with other system resources to form an executable file main, exe, see the below Figure . 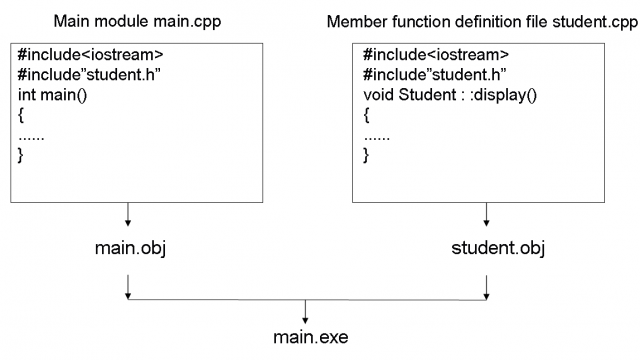 When the main function is executed, the display function in stud is called to output the value of each data member. This is just a program framework. The data members num, name and sex are included in the Student class, but they are not There are assignments to the data members in the stud object. Although the program can be compiled and run, the output value is unpredictable Knowing, meaningless. Readers are requested to make necessary supplements to the above program framework (you can add a pair of Set function for data member assignment). Some readers may consider such a question: if a class declaration is selected by different programs multiple times, each The source file containing the member function definition (such as student.cpp above) must be compiled for the second time.

Put the definition of the member function separately in another file and compile it separately, and you can achieve no repeated compilation. In actual work, a class declaration is not made into a header file, but a number of commonly used functions are similar The class declarations are gathered together to form a class library. There are two types of library: one is the standard library provided by the C++ compilation system; One is a user class library made by users according to their own needs, which is provided to themselves and Use by a person authorized by you Define the class library. In the program development work, the class library is very useful, it can reduce the user’s own access to classes and member functions. The workload defined by the row.

(2) the definition of the compiled member function,

it is the target file. Users only need to load the class library into their own computer system (usually installed in the C++ compilation system ), and use the #include directive in the program to include the header file of the relevant class declaration into the program, you can To use these classes in the program.

This is similar to the method of using standard functions provided by the C++ system in the program. For example, the user is calling sin When function, you only need to include the header file that contains the declaration of this function into the program to call the library function without having to understand How the sin function is implemented (how the function value is calculated). Of course, the premise is that the system has installed standard functions Library. After the user source file is compiled, it is connected with the system library (which is the object file). Include the class declaration header file in the user program, and the class declaration header file becomes an effective method for users to use the class library. Public interface, users can use related classes only through header files. This header text is visible and accessible to users Any user who wants to use this class only needs to include this header file.

The separation of interface and implementation creates good conditions for software developers to provide users with class libraries. Developer Put the declarations of the various classes required by the user in different header files by class, and at the same time, the source text that contains the definition of member functions Compile the file to get the object code defined by the member function. Software vendors provide users with the implementation of these header files and classes The target code (the source code of the function definition is not provided). When users use the classes in the class library, they only need to add the relevant header files Included to In your own program, you can link the object code defined by the member function after compilation. User can see Header file Declaration and the prototype declaration of the member function, but the source code of the definition of the member function cannot be seen, let alone the modification The definition of member function protects the rights and interests of developers. Due to the emergence of class libraries, users can easily use the general or specialized accumulated in practice like using parts. The class used, which greatly reduces the workload of program design and effectively improves work efficiency.

By the way, I will introduce a few terms in object-oriented programming: The member functions of the class reflect the behavior of the object. It is called “method” in object program theory. “Method” refers to the manipulation of data. A “method” corresponds to An operation. Obviously, only methods (member functions) that are declared as public can be activated by the outside world of the object. Outside is

Activate the relevant method by sending a “message”. The so-called “message” is actually a command, a Sentence to achieve. front stud.display(); It is a “message” sent to the object stud to notify the object stud to execute the display “method” (ie display function). The above statement involves 3 terms: object, method, and message. Stud is the object, display() is the square Method, calling a method of an object (such as “stud.display();”) is a message sent to the object, requiring the object to execute Perform an operation.

The object-oriented theory involves many new terms. Readers are advised not to be intimidated or stumped by it. In fact, from practical applications, The point of view is not complicated. The requirements and methods of studying applied courses and studying theoretical courses are different. On average For non-professional readers who are new to C++, they only need to have a general understanding of object-oriented concepts. The focus of learning It should be placed on mastering the actual application, especially not to fall into the “big ocean” of abstract terms at the beginning Don’t die grammatical details regardless of primary and secondary. To be further studied and used in the future, Will naturally go deeper To master. 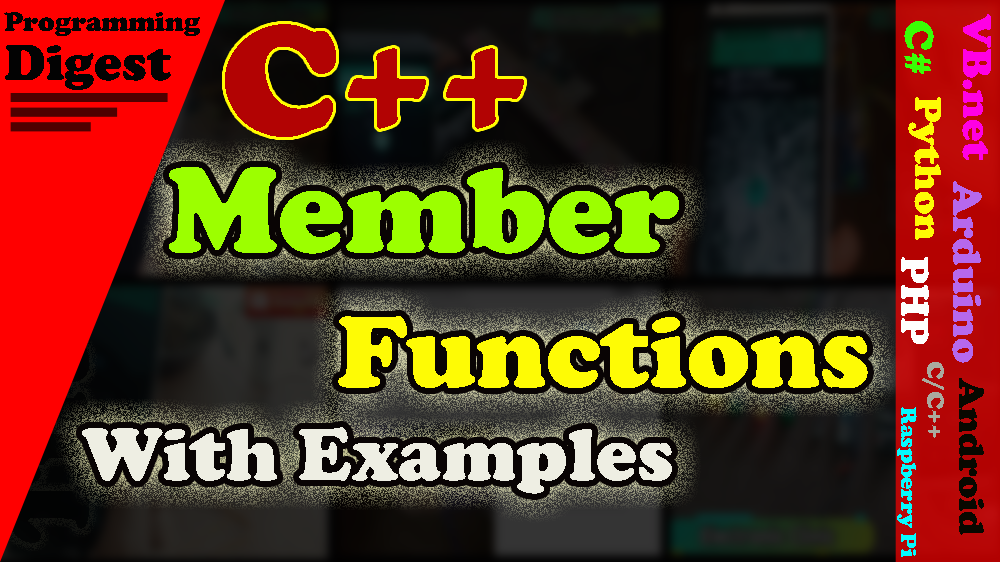