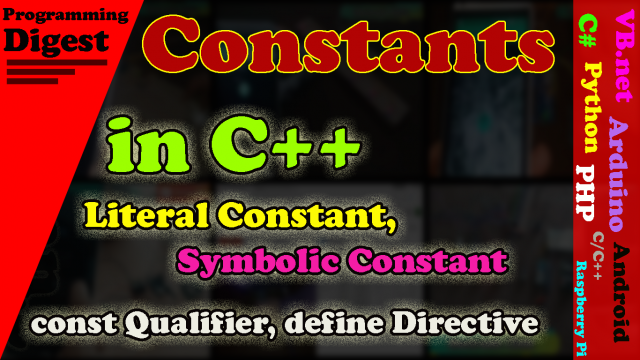 Constants in C++- The quantities that cannot change their value during the execution of the program are called constants.

The constants in C++ are divided into two basic types:

The word ‘literal ‘ means exact or accurate. A literal is a constant in c++ having an independent value that is used in a program source code. For example, the values 10, 10.3, and “Excellent” represent literal constants in C++.

Literal constants in c++ are further divided into:

A sequence of characters enclosed in double quotation marks is known as string constant or string literal. The c++ compiler considers a string constant in c++ as a single token. For example, “my First program”, “012345”, BCS-999” represent string constants.

Example write a program that computes the volume of a cylinder using a const qualifier. The formula to find the volume to the cylinder is: volume=πR^2 xH. The value of π is 3.1417:

The general syntax of ‘define’ directive is as follows:

It indicates the name of a constant identifier to which the constant value is to be assigned. This name cannot be used again in the program as a variable name or function name etc.

It indicates the constant value that is to be assigned to the identifier. It may be a constant value, a string, or a string or an arithmetic expression.

Difference Between define and const in c++:

The difference between the ’define’ directive and ‘const’ qualifier is as follows:

Friend Function And Friend Class In C++ With Examples