In the last, I write the code that output a simple narrative showing the addition operation applied to two rectangle objects along with the result of the add operation. 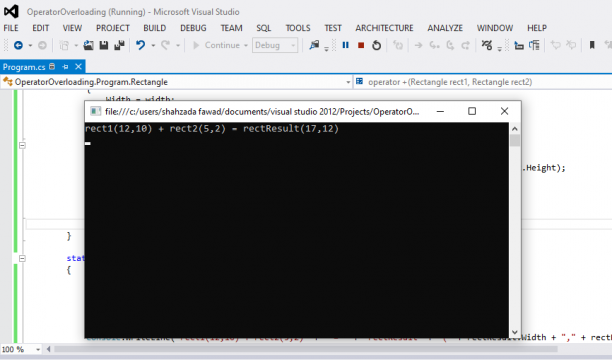 We have seen that a function can be overload in a derived class. We talk, in this case also, function overload. By this overload, we change the meaning of the function compared to the function of the base class. Operators (+, -, etc.) can also be overloaded.

However, not all operators can be overloaded (for example, operator = cannot be overload). The reason for this limitation is simple: do not make programs unnecessarily less legible, or even completely illegible.

Operators that can be overload:

To overload, an operator, write a static function. This must be called operator followed symbol to overload. But there are also other rules:

To illustrate the topic, we will write a class Hour (composed of two private fields: H for hours and M for minutes) and overload the operator – to calculate the duration, expressed in minutes, between two hours. To simplify matters, we will consider that we are staying on the same day. The static operator method – (this is the name to give to the function redefining the operator minus) accepts two-hour arguments and returns the hour difference in minutes.

As we can see in the last line of code, we can now calculate the difference of two Hour objects with a very natural syntax.

Conversion operators can also be overload. Suppose we find it useful, from a point of view of the efficiency of the programming work, of being able to write (here we want to convert the object Time of the previous example as an integer):

where n would contain the number of minutes since midnight of the object now (object of type Hour). The compiler will refuse the instruction because it does not know the rule for converting a Time object into an int. We are going to teach him …

To be able to implicitly convert a Hour object into an int, we must write (in the Hour class) a static function which must be called operator int and which obviously returns an int, which should not be therefore not specify:

Implicit conversions can cause ambiguities that are not always obvious to predict (This is particularly the case for functions that accept an object as an argument). If the compiler arrives at conclusion that there is ambiguity in the conversion, it signals this to you with a syntax error. Consider the following example (conversion of a Time object into a character string) which does not pose no problem when passing a Time object as an argument of WriteLine (the program will display for example 10:45):

But there is ambiguity, with a syntax error, if we add (the compiler ignores whether it needs to convert a Time object in an int or a string because both forms exist as signatures of Console.WriteLine):

The ambiguity is removed by forcing explicit conversions (with the reserved word explicit instead of implicit) and forcing the programmer to write, for example: