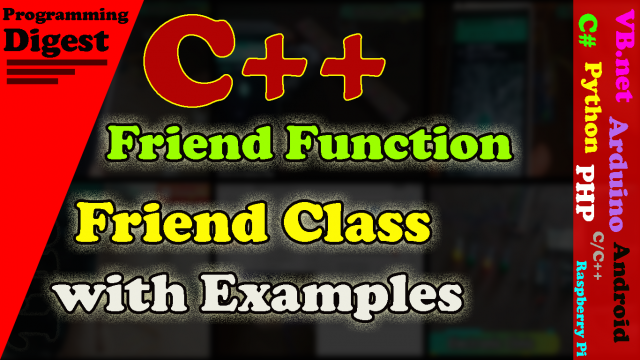 Write a program that explains the concept of friend function:

In this program, the function “xy” is a friend function. Even though the prototype of this function is given in the definition of class “abc” but it is not a member function of this class. Only the friendship is created with the class just to access its private and protected members.

In the definition of function “xy”, the private data members a & b of class “abc” are accessed (i.e. values are assigned to ‘a’ and ‘b’) with the reference of the address of class object ‘c’.

In the main() function, two objects ‘aa’ and ‘bb’ is declared. The ‘aa’ and ‘bb’ are the objects of classes A and B respectively. These objects are passed to the friend function “sum” to calculate the sum of private data members ‘a’ and ‘b’ of classes A and B respectively. The values are assigned to data members ‘a’ and ‘b’ by constructors of the classes.

For example, to declare class b as a friend of class a, the following statement is written in the definition of class a.

write a program that explains the concept of friend class: