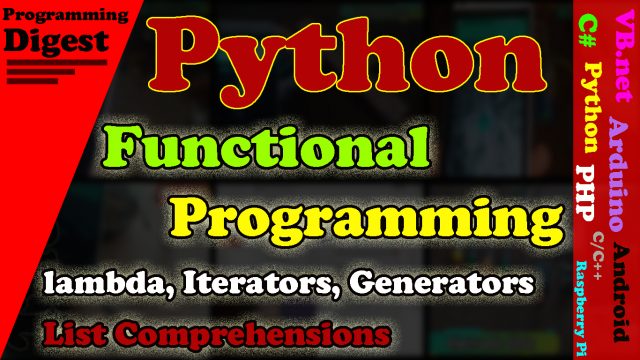 Python supports a form of programming called Functional Programming (FP) that involves programming with functions where functions can be passed, stored, and returned. FP decomposes a problem into a set of functions. The gist of FP is that every function is understood solely in terms of its inputs and its outputs.

Small anonymous method can be created with the lambda keyword. Lambda functions are created without using def keyword and without a function name. They are syntactically restricted to a single expression. Semantically, they are just syntactic sugar for a normal method definition. The syntax for lambda function is,

A Python language feature, iterators, is an important foundation for writing functionalstyle programs. Iteration is a routine term for taking each item of something, one after another. Any time you use a loop to go over a group of items, that is an iteration. In Python, iterable and iterator have specific meanings.

An iterator is an item representing a stream of data; this item returns the data one element at a time. A Python iterator must support a function called __next__() that takes no arguments and always returns the next element of the stream. If there are no more elements in the stream, __next__() must boost the StopIteration exception. The built-in iter() function takes an arbitrary object and tries to return an iterator that will return the object’s contents or elements, else raises TypeError exception if the object does not support iteration.

Generators are a special class of methods that simplify the task of writing iterators. Regular method compute a value and return it, but generators return an iterator that returns a stream of values. When you call a function, its local variables have their own scope. After the return statement is executed in a function, the local variables are destroyed and the value is returned to the caller. Later, a call to the same function creates a fresh set of local variables that have their own scope. However, what if the local variables were not thrown away on exiting a function? What if you could later resume the function from where it left off? This is what generators provide; they can be thought of as resumable functions. A generator function does not include a return statement. Here’s the simplest example of a generator function,

Any method containing a yield keyword is a generator function. When you call a generator function, it does not return a single value. Instead it returns a generator object that supports the iterator __next__() method. Inside the for loop on executing the yield expression, the generator outputs the value of i, similar to a return statement. The main changes between yield and a return statement is that on reaching a yield the generator’s state of execution is temporarily suspended and local variables are preserved. On the next call to the generator’s __next__() method, the function will resume execution from where

it left off. In the real world, generator functions are used for calculating large sets of results where you do not know if you are going to need all results.

List comprehensions provide a concise way to make lists. Common applications of list comprehensions are to create new lists where each element is the result of some operation applied to each member of another sequence or iterable or to create a subsequence of those items that satisfy a certain condition.

A list comprehension consists of brackets containing a variable or First Part) followed by a for clause (Middle Part), then predicate True or False using an if clause. The components expression and predicate are optional. The new list resulting from evaluating the expression in the context of the for and if clauses that follow it will be assigned to the list_variable. The variable represents members of input. The order of execution in a list comprehension is (a) If the if condition is not specified, then Middle Part and First Part gets executed; (b) If the if condition is specified, then the Middle Part, Last Part, and First Part gets executed. For example,

Simple for loops can be written as comprehensions offering cleaner and more readable syntax. Comprehensions can be thought of as a compact form of a for loop. In the list comprehension, the variable number indicates the item that will be inserted into the list shahzada_fawad at each step of the for loop. In the for loop, the iterating variable number iterates through each character of the string ‘1729’. The resulting list is assigned to the shahzada_fawad list variable and displayed.

In the above code, numbers from 1 to 9 are generated using the range() function. The iterating variable x iterates through 1 to 9 and at each iteration, the square of the number is found and assigned to squares list. Print the items of the square list.

In the above code, the input() function requires the user to enter words as input separated by a space. Use the split() function on these entered words to get a list of string items. Use a for loop to iterate through each of these list items using an each_word iterating variable. Insert each of the string items to words list. Then, sort the words list using the sort() method in ascending order according to their ASCII values. Join the string items in words list using join().

Python Classes and Objects With Examples