In Java, there are not only classes but also interfaces. These are introduced with the keyword interface instead of the keyword class. Interface in java, like classes, should each be stored in a separate Java file. In terms of structure, interfaces are very similar to a class; they are almost comparable to abstract classes that only contain method declarations. The only difference to a class is that an interface in java has no implementations, just method headers, and constants.

Among other things, interfaces are used to separate the specification of classes from their implementation. But you can also use interfaces to protect the actual implementation from third parties. Interfaces and the methods they contain can therefore also be used as communication interfaces since the transfer parameters to be expected and the return value is defined by the method header.

Like classes, an interface in java can also have an inheritance hierarchy. The same rules apply there as for classes (single inheritance, visibility, etc.).

But since we also want to use interface in java, we have to integrate them into a class somehow. This is done using the implements keyword. The following example shows how the MyInterface interface above is included in a class.

We can easily extend the normal structure of a class with the new interface by including our interface MyInterface in front of the class body with the keyword implements. Integrating an interface can take place parallel to inheritance. You can include any number of interfaces in a class, the interface names are then simply separated by a comma in the class header. This is often used to simulate a kind of multiple inheritances in Java since this is otherwise not directly possible.

Example: how to use Interface in java

In the example above, we have created an interface called PrintMessage which will be included in the Test class. The Test class must then implement the method declarations from the interface.

Java multiple interfaces in a class

Since we can only simulate indirect multiple inheritances in Java by including multiple interfaces, we now want to deal with this topic in more detail.

Constants from different interfaces can have the same name but a different value. However, this should be avoided. However, you can then access the respective constant by specifying the interface name.

Let’s take a look at an example.

Example: how to use multiple interfaces in a class in java:

In the main method, we now output the constants. 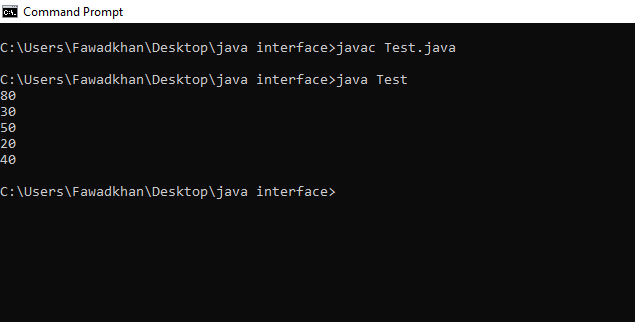 A special interface in java is the Cloneable interface. This serves to create an exact copy of an object. Normally one would think that an assignment also creates an exact copy of an object. However, this is only the case for simple data types. In the case of objects, however, when an assignment is made, there is only a reference to the memory area in which the object is located. To illustrate this referencing, let’s take a look at the following example.

Example1: how to use Cloneable interface in java: 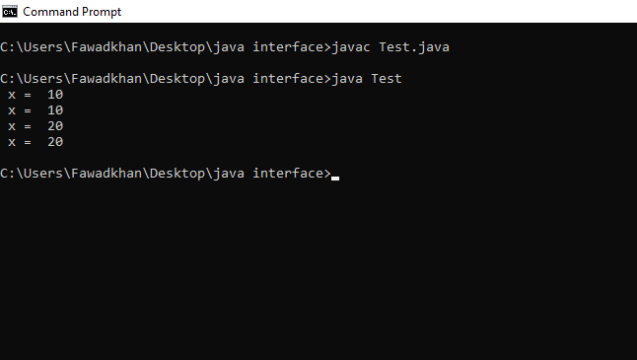 In the main method, we first create an object of the copy class and assign it to the variable ref1. Right after that, we assign the value of ref1 to the variable ref2. If we now look at the output, we see that the first two outputs are identical. This is also not surprising since the first two outputs occurred directly after the assignment (ref2=ref1). The other two editions are more surprising. We recently changed the x attribute of ref1. Therefore, one might have expected that the output from both objects ref1 and ref2 are different. But since we already said before this example that an assignment to objects does not create a copy of the first object, but only refers to it, this output is only logical, since we are referencing the same object via both variables.

In the above image, you can see the assignment from our object ref1 to ref2. Both “point” to the same object. This type of assignment also happens with method calls that have objects as transfer parameters. This allows you to implement multiple return values ​​in a method by changing the attributes of the object. However, this is not always desired and therefore one must first consider whether one actually wants to change the existing object. 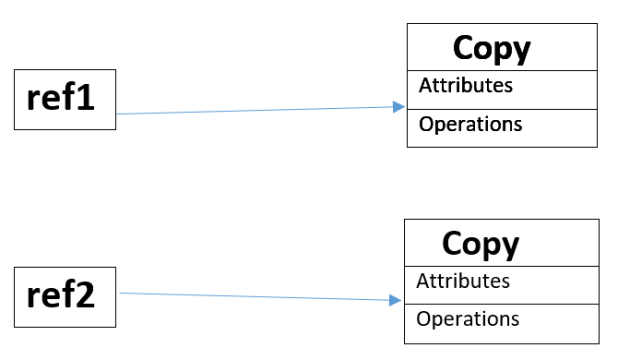 if we really want to copy the object, we have to clone it. The cloning is shown in the above image. Here each variable points to its own object after the cloning process. At this point, a change does not affect the other variable.

We now extend our copy class and implement the Cloneable interface there.

Example2: how to implement the Cloneable interface in java: 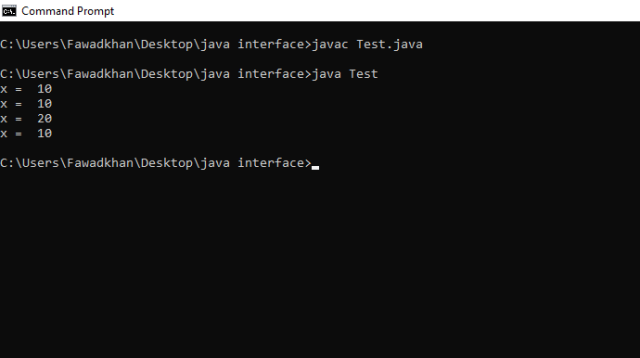 Experienced developers can see from the source code that the error handling has not been solved well. Two other exceptions that could not have been caught or detected by simple inspection may occur. The first additional exception that should have been caught in another catch block would be the TypeCastException that can occur during type conversion from Object to Copy. The second additional exception that can occur would be the NullPointerException. If an exception occurs in the try block, ref2 remains at the value null. With the method call ref2.print() the NullPointerExceptionthrown.

You can also implement the clone method yourself by creating a new object of the class to be copied with the new operator and assigning the existing attributes, provided they are simply data types, to the new object and then returning the newly created object. Depending on which superclasses exist, you may have to implement the method yourself and not call super.clone(). Let’s now look at a separate method clone for the above class Copy, without including the superclass.

This is a very simple example, but basically calling the super.clone() method does nothing else. With more complex objects, of course, more attributes have to be “cloned”, so the method would contain a few more statements.

Java interface as a data type:

This also makes it possible, as shown in the following example, to store objects of different classes in an array.

Example: how to use java interface as a data type:

In order for us to test this, we need a starting class Test. There we declare two variables Object1 and Object2, which have the myInterface data type interface, and assign an object of the anyName1 type to the first and an instance of the anyName2 class to the second. We then declare an array whose elements should be of the myInterface type. We then call the setX method from the interface for each object. Then we move the Objects into the array and let us output the x-values in the for loop via the method getX declared in the interface.

You can see that the anName2 class has one more attribute and two more methods. However, these are no longer accessible after the assignment to the variable Object2, since the object only has the methods of the interface. It would first have to be typecast to the anyName2 class for access to be possible.

As you can see from this example, interface in java can also be used as data types, but it should be noted that only the methods declared in the interface can be accessed. Access to the methods additionally implemented in the original class is not possible. increment and decrement operators in java with example using NetBeans