The capacitor is a component whose basic function is to store charge electricity in limited quantities so that it can be used on occasions very specific as an “alternative power supply”. The capacity (C) of a capacitor is its most important characteristic and is can be defined as the relation –normally of a constant value– that exists between the amount of electric charge (Q) that it stores at a given moment and the voltage (V) that is being applied to it at the same moment. Specifically, it defines thus: C = Q / V. From the above formula we can deduce several things: the first is that a capacitor with higher capacity than another will store more charge under its potential.

The second is that a capacitor with a certain capacity will store more charge the higher the applied voltage (although in this sense keep in mind that every capacitor has a maximum working voltage –Which is usually printed on the body of the condenser itself– beyond which the can damage, so you will always have a maximum storable load). Capacitance is measured in Farads (F), although most capacitors with whom we will work have a much lower capacity (on the order of microfarads or even nanofarads). Depending on the size of the capacitor, It may be that the value of its capacity cannot be silk-screen as it is on its body; In such cases, a three-digit sequence is usually used to indicate the first two digits of the capacity value and then its multiplier. For example, a capacitor with the number “403” printed on it, it means that it has a capacity of 40103 = 401000 = 40,000 F. As with resistors, capacitors can be connected in series or in parallel to achieve a circuit with a capacity equivalent. Specifically, if two capacitors (C1 and C2) are connected in series, the equivalent capacity is C = (C1 · C2) / (C1 + C2); that is, less than any of the individual capacitors. If the two capacitors are connected in parallel, the equivalent capacity is C = C1 + C2; that is, we obtain a total capacity higher. A fully charged capacitor, in DC current circuits, acts as an open switch. 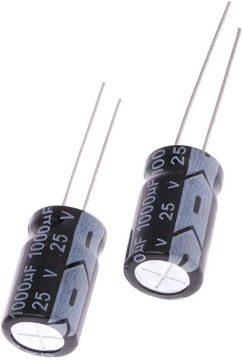 We can classify the types of capacitors according to whether or not they have polarization. Capacitors polarized are the ones to be connected to the circuit respecting the direction of the current. That is, they have a “negative” terminal that should always connect to the negative pole of the circuit, and another “positive” terminal that should always be connected to the positive pole. In other words, your connection has been to always perform forwarding polarization.

Is by This means that this type of capacitor is not valid to be used in the alternating current; in fact, by connecting them in reverse bias are destroyed. To distinguish one terminal from the other, we can look at a stripe painted on the body of the condenser, which will always indicate the terminal negative (similar to what happened with diodes). Another clue that we can use for the same is to notice that the negative terminal is shorter than the positive (as was the case with LEDs). As most noteworthy features, we can say that polarized capacitors have a standard capacity quite high (of a value greater than 1 microfarad), and, taking into account the manufacturing mode, they are usually electrolytic type (as shown in the image) or tantalum. 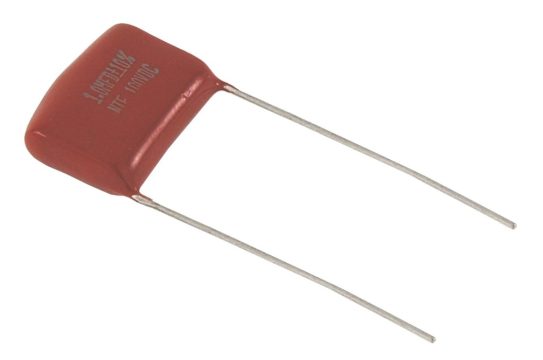 Unipolar Capacitors (Unpolarized) can be connected to the circuit in both directions indifferently (like resistors, for example). They can be made of many materials, but the most common are those of ceramic (like the one shown in the picture). The in general, they tend to have a considerably lower capacity than polarized capacitors. Capacitors are often used in circuits to provide the so-called “bypass feed” or “decoupling” (in English, “by-pass” or “decoupling”).

This supply is necessary when a component that normally does not require a lot of current intensity to work, has to punctually carry out such high consumption of electricity that the source of ordinary food is not able to offer it quickly enough. This normally occurs when said component (a microcontroller, for example) goes from being in the deactivated state to activated; at that moment is when the capacitor quickly provides the necessary transient current by “releasing” the electrical charge that it kept in storage. With this feeding system “Alternative”, it is possible to give a quick response to the peak of consumption of the component while the power supply can be recharging the condenser (at a slower rate) heading into the next peak. To use a capacitor that performs this function, one of its terminals must be connected as close as possible to the power input of the component to “manage” (how much farther away, less effect) and the other terminal to circuit ground. Typical values of a “by-pass” capacitor are 0.1 µF or 0.01 µF. Another very frequent use of capacitors is the elimination of “noise” of the DC power signal. That is, even if a font is labeled nominally as 9V for example will never actually deliver that 9V exact, but that value will undergo more or less wide variations and random around their face value. Therefore, in addition to a DC supply, we always have a little AC power around it. Depending on the magnitude of this AC supply (that is, of the variations around 9 V in the example), we could have a problem in our circuit, because effects of AC-type currents that we do not want would appear. A capacitor is capable of stabilizing these variations, making it possible to obtain from the source a value of more constant tension, thanks to the fact that it is able to conveniently regulate the load that “releases” or “accumulates” depending on the fluctuating voltage to which it is subjected. To use a capacitor that performs this stabilization function of the signal (which are often called “filter capacitors”), one of their terminals is must be connected to the positive terminal of the power supply and the other terminal has been connected to the negative terminal.

A typical value for a filter capacitor is 0.1 µF. TO higher AC current frequencies, lower capacitors are needed capacity. You can even connect several capacitors in parallel of different capacity, to filter different frequencies. Actually, capacitors are used in a multitude of applications: as batteries and memories for their ability to store charge, to perform discharges fast (like the “flash” light of a photographic camera), to maintain currents stable (such as those generated by a rectifier), to avoid drops of point currents in the circuits (that is, the “by-pass” function), to isolate parts of a circuit (when fully charged), etc. Symbols used in the design of electrical circuits to represent a capacitor can be two: 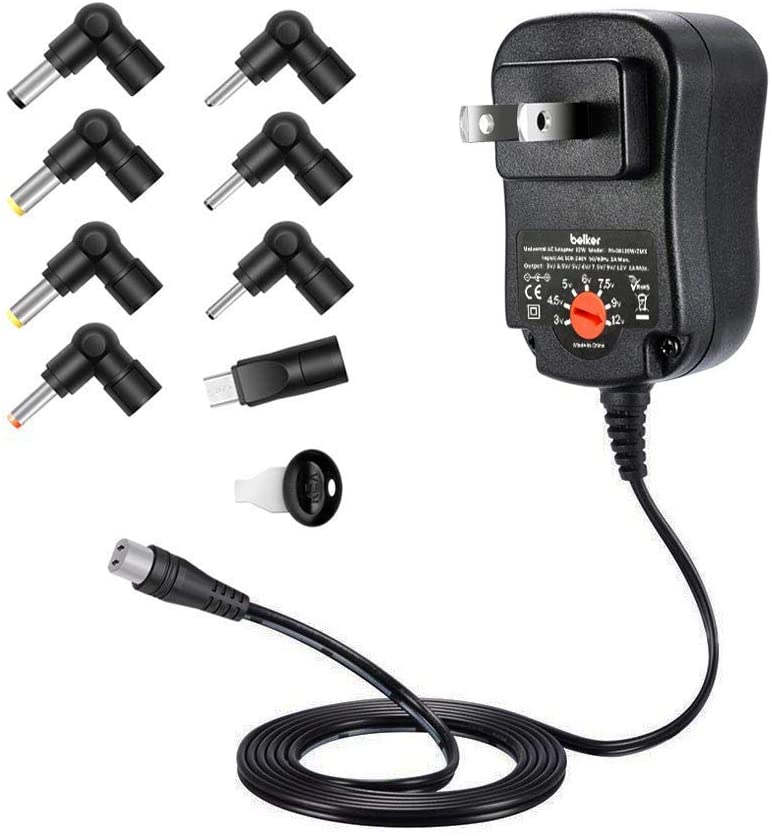 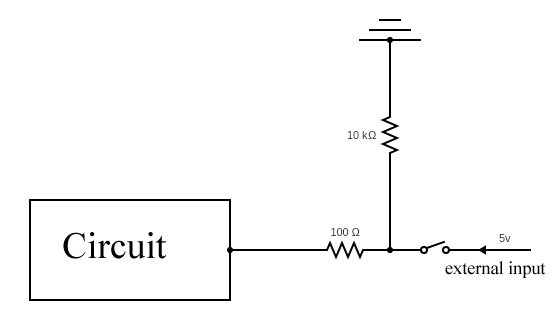 Basic Electronics: pull up and pull down resistors