What are Arrays in Java:

Java Arrays:- Up to now you only had to deal with a few variables in the individual Java programs. In many cases, it is feasible to store information in independent variables. However, what if you had 20 items of related information that you all had to store? You could create 20 individual variables and set their initial value. This approach will always be the more unsuitable the more information you work with. What if it was 100 or even 1000 elements?

Java Arrays provide a method of storing a number of elements, all of the same primitive data type or of the same class. Each element is assigned its own storage space within the Java Arrays. These locations are numbered so that you can easily access the information. Java Arrays can contain any kind of information that can also be stored in a variable. As soon as but an array has been created, you can only use it for this one type of information. You can e.g. create an array for integers, one for string objects, or one for arrays. But it is not possible to have a Create an array that contains both strings and integers. Java implements arrays differently than other programming languages, namely as objects that are like other objects can also be treated.

How do you make Java Arrays?:

The first step in creating an Java Arrays is to declare a variable that will hold the array. The happens the same way as with other variables. Java Arrays variables are assigned a type that the array accepts (as with any variable), and the name of the array. To get the whole thing from a normal variable declaration too differentiate, a pair of empty square brackets ([]) are added to the data type or the class name or the Name of the array appended. The following are typical declarations of array variables:

Alternatively, an array variable can be defined by putting the brackets after the variable rather than to be inserted after the type. The above three declarations would look like this after this method:

You will see both styles in programs. There is no consensus on which style is more readable, so it is up to personal preference to choose a shape.

In the second step an array object is created and assigned to this variable. This can be done in two ways respectively:

Since arrays are objects in Java, you can use the new operator to create a new instance of an array create:

This statement creates a new array of strings with ten elements. When creating a new Array object with new you have to specify how many elements the array should contain. This statement adds don’t put String objects in the array – you’ll have to do that yourself later. Array objects can contain primitive types such as integers or Boolean values ​​just like objects:

When creating an array object with new, all elements of the array are automatically initialized (0 for numeric Java Arrays, false for boolean, ‘\ 0’ for character arrays and null for all others). You can create and initialize an array in the same way. Instead of using new enclose the elements of the array in brackets and separate them with commas:

Note that the Java keyword null refers to the Null object (and for any Object reference can be used). However, it is not equivalent to 0 or ‘0 /’ (null character), as is the case with the constant NULL in C is the case. All elements within the brackets must be of the same type as the type of the variable that contains the array. An array is automatically created with the number of elements you specified have created. This example creates an array of String objects called chiles that contains five elements.

After you’ve created an array of initial values, you can test it and the values ​​of each cell of the array. To access the value of an element in an array, use the array name followed by an index in square brackets, too. This combination of name and index can be used in expressions will:

The contestantScore part of this expression is a variable that contains an array object, but it can also be a Be an expression that returns an array. The index defines the elements of the array that is being accessed. This can also be an expression. Array indexes start with 0 as in C and C ++. An array of ten Elements therefore has index values ​​from 0 to 9.

All array indices are checked to make sure they are within the bounds of the array, how these were specified when the array was created. In Java it is impossible to access any value in a Array element outside these limits to access or to save a value in such an element. This avoids problems such as those encountered when crossing array boundaries in languages ​​such as C. arise. Consider the following two statements:

A program that contained the previous two lines would generate a compiler error if abc[10] is used. The error occurs because abc doesn’t have an element with index 10 – it has 10 elements, but the index values ​​start at 0 and end at 9. The Java compiler starts this error. If the array index is calculated at runtime (e.g. as part of a loop) and ends outside of the Array limits, the Java interpreter also generates an error (to be technically correct, an Exception to).

How can you prevent a program from accidentally crossing the boundaries of an array? You can test the length of an array in your programs with the instance variable length. It is for all array objects, regardless of type, available:

As you have seen in the previous examples, simply put an assignment statement after it the name of the array with the element’s index in square brackets to match a specific array cell Assign value:

It is important to note here that an array of objects in Java contains references to these objects (similar to like a pointer array in C or C ++). If you give an array element in such an array a value assign, create a reference to the object in question as with a simple variable. Move If you have values ​​in Java Arrays (such as the last line above), reassign the reference. You copy so not the value of one element in another. Copy Java Arrays with primitive types like int or float however, the values ​​from one element to another. Java Arrays are easy to create and their contents are easy to modify. For Java, they offer a huge Functionality. You will find that the more language you use, the more Java Arrays you become will work.

example: how to create a single dimensional array in Java: 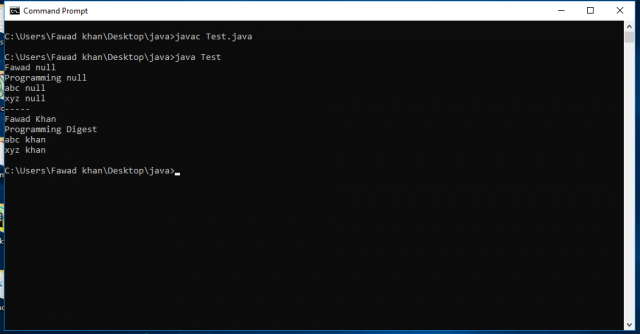 This longer example shows how Java Arrays are created and used. The class that will be created here Test, has two instance variables, each of which accepts an array with string objects. The first that the Name firstNames is initialized in line 3 with four elements. The second instance variable, lastNames, is declared in line 4. However, no values ​​are inserted into this array. Please note that the array lastNames has exactly the same length as the array firstNames, since here the Variable firstNames.length was used to specify the size of the new array. The instance variable length of Array objects contains the number of elements in an array.

The Test class (it also has two methods: printNames () and main (). PrintNames ()), which are in lines 6 through 19 is a helper method that controls the individual elements of the firstNames and lastNames goes through and shows their values. Please note that the array index (i) is initially set to 0 because the numbering in Java arrays starts with 0.