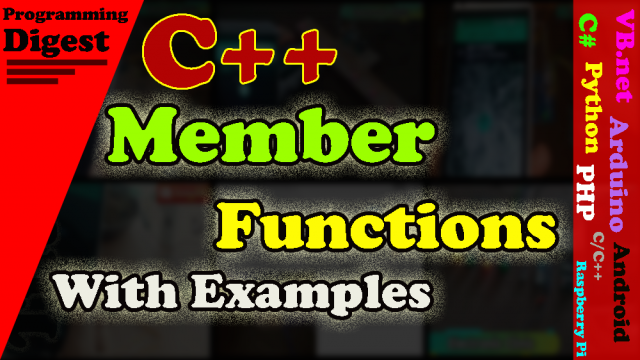 The nature of member functions In C++

Member function of the class (referred to as the class function) is a kind of function, and its usage and function are basically the same as the general function. Similarly, it also has return values ​​and function types. The difference between it and general functions is only: it is a member of a class, Now in the class body. It can be designated as private, public or protected When using a class function, pay attention to the permission to call it (whether it can be called) and its scope (the function can be used What range of data and functions to use). For example, private member functions can only be called by other member functions in this class Use, but cannot be called outside the class. Member functions can access any member of this class (including private and public), but To refer to data valid in this scope.

Define member functions outside the class in C++

Where the 3rd line

Can also be written as

For those that need to be processed as built-in functions, just make an inline declaration in the function definition or the function prototype declaration. (One of the two is fine). It is worth noting that if the inline function is defined outside the class, the declaration of the class The definition of the member function and the member function are placed in the same header file (or written in the same source file), otherwise it cannot be compiled Perform replacement (embed a copy of the function code into the function call point). But doing so is not conducive to the interface and the class To achieve separation is not conducive to information concealment. Although the execution efficiency of the program has been improved, from the perspective of software engineering quality Look, this is not a good way. Only when the scale of the member function defined outside the class is small and the calling frequency is high, it is designated as a built-in function.

Storage of member function in C++ 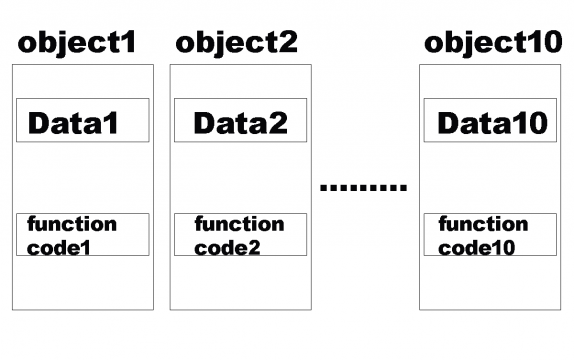 In fact, this is not the case. After analysis, it can be seen that the values ​​of data members in different objects of the same type are generally different The same, but the code of the function of different objects is the same, no matter which object’s function code is called, it is actually adjusted The same code is used. In this case, open up 10 segments of space in the memory to store 10 identical internal The function code segment of the content is obviously unnecessary. People naturally think: Can you just use a space to store this common The target code of the function, when calling the function of each object, all call this common function code, as shown in the below Figure. 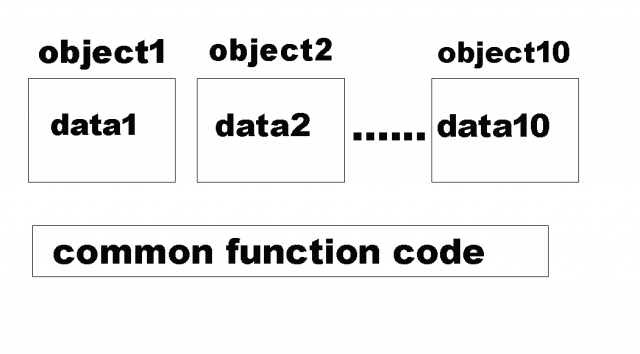 Readers can use the following statement to get the number of bytes occupied by this type of object: cout << sizeof (Time) << endl;

In the Visual C++ environment, the output value is 12. This proves that the space occupied by an object only depends on It is the space occupied by the data member in the object, and has nothing to do with the member function. The target code of the function is stored in the object empty Outside of time. If 10 objects are defined for the same class, the member functions of these objects correspond to the same function Code segment instead of 10 different function code segments. It should be noted that although the same function code is executed when calling member functions of different objects, the execution The row results are generally not the same. For example, when the member function display of the stud1 object is called, the output is the object

(2) Don’t confuse this storage method of member functions with the concept of inline (built-in) functions. Don’t mistake A member function declared inline (or inline by default), its code segment occupies the storage space of the object, instead of inline

Object And Class in C++ with Example