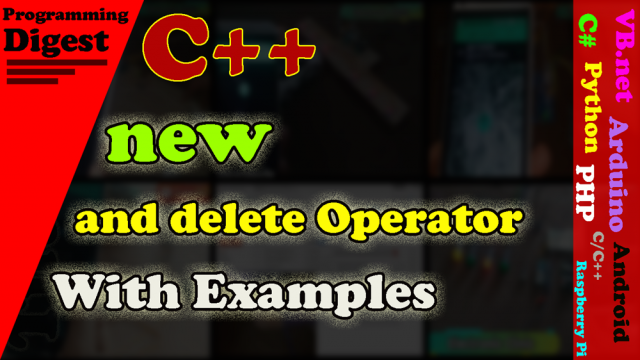 The general syntax of the new operator is as for follows:

ptr: it represents the pointer to an object.

Data_type: it represents the data type. It may be the standard data type or name of a defined class or structure. It must be the same as type of pointer variable.

In these statements, the first statement declares a pointer variable of float type. In the second statement, the new operator allocates memory of size 4 bytes to store float type data. The address of allocated memory is assigned to pointer ‘p’.

We can also allocate a consecutive block of memory to store same type of data such as an array. In this case, the memory address of first element of array is assigned to the pointer variable. For example, to allocate memory for n array of ten elements, the statements are written as:

The general syntax of delete operator to de-allocated memory occupied by an array is as follows:

ptr: it represents the pointer variable which holds the memory address of the object which is to deleted from memory.

How to use new and delete operator in C++ that allocates memory location for two integer values and computes the sum of these values:

How to use new and delete operator in C++ that allocates memory location for an array of int type and find the largest value in the array:

How to use new and delete operator in C++ that allocates memory location for four integer values and store the addresses of allocated memory and find out the smallest value from the four values:

Pointer Variables in C++ with Examples