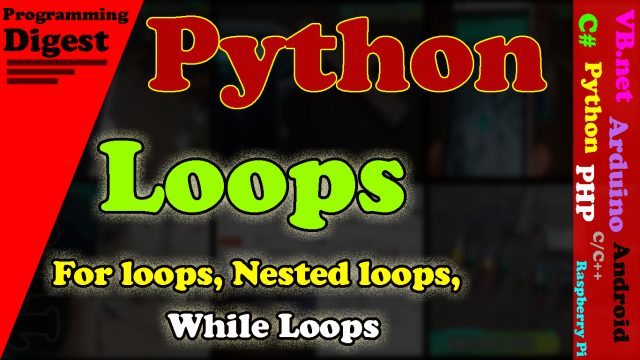 Python Loops-As one of the most basic functions in programming, python loops are an important piece to nearly every programming language. Python loops enable developers to set certain portions of their code to repeat through a number of python loops which are referred to as iterations. This topic covers using multiple types of python loops and applications.

Break and Continue in Python loops

When a break statement executes inside a loop, control flow “breaks” out of the loop immediately:

Breaking from loop break statements can also be used inside for python loops, the other looping construct provided by Python:

Note that 3 and 4 are not printed since the loop has ended.

If a loop has an else clause, it does not execute when the loop is terminated through a break statement.

A continue statement will skip to the next iteration of the loop bypassing the rest of the current block but continuing the loop. As with break, continue can only appear inside python loops:

Note that 2 and 4 aren’t printed, this is because continue goes to the next iteration instead of continuing on to.

break and continue only works on a single level of loop. The below example will only break out of the inner for loop, not the outer while loop:

Python doesn’t have the ability to break out of multiple levels of loop at once — if this behavior is desired, refactoring one or more python loops into a function and put back break with return may be the way to go. Use return from within a function as a break The return statement exits from a function, without executing the code that comes after it. If you have a loop inside a function, using return from inside that loop is equivalent to having a break as the rest of

For loops in python:

for loops iterate over a group of items, such as list or dict, and run a block of code with each element from the collection.

The above for loop iterates over a list of numbers. Each iteration sets the value of i to the next element of the list. So first it will be 0, then 1, then 2, etc. The output will be as follow:

range is a function that returns a series of numbers under an iterable form, thus it can be used in for loops:

gives the exact same result as the first for loop. Note that 5 is not printed as the range here is the first five numbers counting from 0.

To iterate through a list you can use for:

This will print out the elements of the list:

The range function generates numbers which are also often used in a for loop.

The answer will be a special range sequence type in python >=3 and a list in python <=2. Both can be looped through using the for loop.

If you want to loop though both the elements of a list and have an index for the elements as well, you can use Python’s enumerate function:

enumerate will generate tuples, which are unpacked into index (an integer) and item (the actual value from the list). The above loop will print

Iterate over a list with value exploit using map and lambda, i.e. apply lambda function on each element in the list:

NB: in Python 3.x map returns an iterator rather of a list so you in case you need a list you have to cast the result

Python loops with an “else” clause:

The else clause does not execute if the loop terminates some other way (through a break statement or by raising an exception):

Most other programming languages lack this optional else clause of python loops. The use of the keyword else in delicate is often considered confusing. The original concept for such a clause dates back to Donald Knuth and the meaning of the else keyword becomes clear if we rewrite a loop in terms of if statements and goto statements from earlier days before structured programming or from a lower-level assembly language. For example:

These remain equivalent if we attach an else clause to each of them. For example:

A for loop with an else clause can be decided the same way. Conceptually, there is a loop condition that remains True as long as the iterable object or sequence still has some remaining elements. Why would one use this strange construct? The main use case for the for…else construct is a concise accomplishment of search as for instance:

To make the else in this construct less confusing one can think of it as “if not break” or “if not found“. Some discussions on this can be found in [Python-ideas] Summary of for…else threads, Why does python use ‘else’ after for and while loops? , and Else Clauses on Loop Statements

pass is a null statement for when a statement is required by Python syntax (such as within the body of a for or while loop), but no action is required or desired by the programmer. This can be useful as a placeholder for code that is yet to be written.

In this example, nothing will happen. The for loop will complete without error, but no commands or code will be actioned. pass allows us to run our code successfully without having all behests and action fully implemented. Similarly, pass can be used in while loops, as well as in selections and function definitions etc.

To iterate through its keys, you can use:

This is equivalent to:

To iterate through its values, use:

To iterate through its keys and values, use:

Note that in Python 2, .keys(), .values() and .items() return a list object. If you simply need to iterate through the answer, you can use the equivalent .iterkeys(), .itervalues() and .iteritems(). The  disparateness between .keys() and .iterkeys(), .values() and .itervalues(), .items() and .iteritems() is that the iter* methods are generators. Thus, the elements within the dictionary are yielded one by one as they are evaluated. When a list object is returned, all of the elements are loaded into a list and then returned for further evaluation. Note also that in Python 3, Order of items printed in the above etiquette does not follow any order.

in different other languages, Python doesn’t have a do-until or a do-while construct (this will allow code to be executed once before the condition is tested). However, you can associate a while True with a break to achieve the same purpose.

If you want to loop over a list of tuples for example:

You can simply do this:

This will also work for most types of iterables, not just tuples.

Python loops Iterating different portion of a list and with step size:

Suppose you have a long list of elements and you are only interested in every other element of the list. Perhaps you only want to examine the first or last elements, or a specific range of entries in your list. Python has strong indexing built-in capabilities. Here are some examples of how to achieve these scenarios. Here’s a simple list that will be used throughout the examples:

The for loop assigns s for each items of lst. This will print:

Often you need both the element and the index of that element. The enumerate keyword performs that task.

The index idx will start with zero and increment for each iteration, while the s will contain the element being processed. The previous snippet will output:

If we want to iterate over a lea (remembering that Python uses zero-based indexing), use the range keyword.

The list may also be sliced. The following slice jotting goes from element at index 1 to the end with a step of 2.

The two for loops give the same result.

Indexing and slicing is a topic of its own.

While Loops in python:

While the above loop can easily be translated into a more elegant for loop, while loops are useful for checking if some condition has been met. The following loop will continue to execute until myObject is ready.

If the condition is always true the while loop will run forever (infinite loop) if it is not terminated by a break or return statement or an exception.