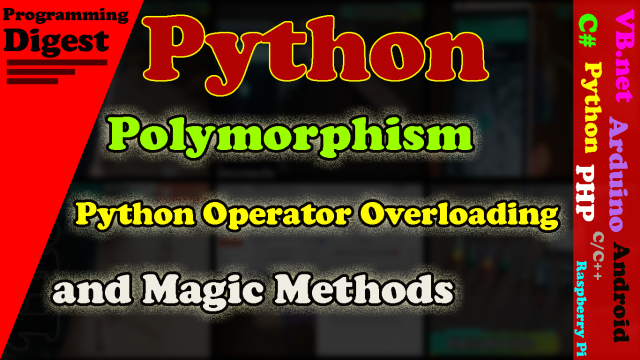 example of python Polymorphism is supposed when if you are in a classroom that time you behave like a student when you are in the market at that time you behave like a customer, when you are at your home at that time you behave like a son or daughter, such that same person is presented as having different behaviors. Python is a dynamically-typed language and specifically uses duck-typing. The term duck-typing comes from the idiomatic saying, “If it looks like a duck and quacks like a duck, it is probably a duck.” Duck-typing in Python allows us to use any object that provides the required methods and variables without forcing it to belong to any particular class. In duck-typing, an object’s suitability is determined by the presence of methods and variables rather than the actual type of the object. To elaborate, this means that the expression some_obj.foo() will succeed if object some_obj has a foo method, regardless of to which class some_obj object actually belongs to. Difference between inheritance and polymorphism is, while inheritance is implemented on classes, python Polymorphism is implemented on methods.

Even though each of these methods in the classes have the same name, their implementation details are different. Polymorphic behavior allows you to specify common methods in a base class and implement them differently in other derived classes. In this program, we defined two derived classes, Bike and Car, inherited from vehicle class, and provided their own implementation of vehicle_model() method on top of vehicle_model() method found in

Vehicle class. Notice that all the classes have vehicle_model() method but they are implemented differently. The method vehicle_model() is polymorphic, as these methods have the same name but belong to different classes and are executed depending on the object. The behavior of the same method belonging to different classes is different based on the type of object. To allow python Polymorphism, a common interface called vehicle_info() – function is created

as the iterating variable. Depending on what type of object it has, the program decides which methods it should use. If that object does not have the methods that are called, then the function signals a run-time error. If the object does have the methods, then they are executed no matter the type of the object, evoking the quotation and, hence, the name of this form of typing. Since object boeing has no vehicle_model() method associated with it, an exception is raised.

In the above program, Shape is the base class while Rectangle  and Circle  are the derived classes. All of these classes have common methods area() and perimeter() added to them but their implementation is different as found in each class. Derived classes Rectangle and Circle have their own data attributes. Instance variables rectangle_obj and circle_obj are created for Rectangle and Circle classes respectively. The clearest way to express python Polymorphism is through the function shape_type() , which takes any object and invokes the methods area() and perimeter() respectively.

Operator Overloading is a specific case of python Polymorphism, where different operators have different implementations depending on their arguments. A class can implement certain operations that are invoked by special syntax (such as arithmetic operations or subscripting and slicing) by defining methods with special names called “Magic Magic Methods for Different Operators and Functions.

Invoked for Binary AND Operations

Invoked for Binary OR Operations

Invoked for Binary AND Assignment Operations

classes to define their own behavior with respect to language operators. Python uses\ the word “Magic Methods” because these are special methods that you can define to add magic to your program. These magic methods start with double underscores and end with double underscores. One of the biggest advantages of using Python’s magic methods is that they provide a simple way to make objects behave like built-in types. That means you can avoid ugly, counter-intuitive, and nonstandard ways of using basic operators. The basic rule of operator overloading in Python is, Whenever the meaning of an operator is not obviously clear and undisputed, it should not be overloaded and always stick to the operator’s well-known semantics.

You cannot create new operators\ and you can’t change the meaning of operators for built-in types in Python programming language. Consider the standard + (plus) operator. When this operator is used with operands of different standard types, it will have a different meaning. The + operator performs arithmetic addition of two numbers, merges two lists, and concatenates two strings.

Invoked for Binary OR Assignment Operations

Invoked for Unary Plus Operator

Invoked for Less-Than or Equal-To Operations

Invoked for Greater Than or Equal-To Operations

Invoked for Greater Than Operations

Consider the below code having Complex class with real and imaginary as data attributes class Complex:

return Complex(self.real + other.real, self.imaginary + other.imaginary) Thus, by adding this method, suddenly magic has happened and the error, which you received earlier, has gone away. This method returns the Complex object itself by calling the Complex class __init__() constructor, with self.real + other.real value assigned to real data attribute and self.imaginary + other.imaginary value assigned to the imaginary data attribute.

The return value of __str__() method has to be a string, but it can be any string, including one that contains the string representation of integers. In the implementation of the __ str__() magic method, you have customized it for your own purpose. The __str__() method returns a string with values of real and imaginary data attributes concatenated together, and the character i is prefixed before imaginary data attribute value.

Python Polymorphism example: Write a program which Checks Whether the Area of the First Rectangle is Greater than Second by Overloading > Operator