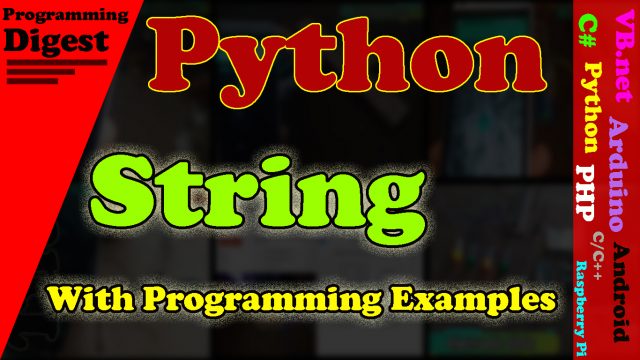 The str() function returns a string which is considered an informal or nicely printable representation of the given object. The syntax for str() function is,

Here integer type is converted to string type. Notice the single quotes to represent the

string . The create_string is an empty string of type str.

In Python, strings can also be concatenated using + sign and * operator is used to create a repeated sequence of strings.

You can use (>, <, <=, >=, ==, !=) to compare two python strings resulting in either Boolean True or False value. Python compares strings using ASCII value of the characters. For example,

is also called subscript operator. The index breakdown for the string “be yourself” assigned to word_phrase string variable is shown below.

The syntax for accessing an individual character in a string is as shown below.

where index is usually in the range of 0 to one less than the length of the string. The value of index should always be an integer and indicates the character to be accessed. For example,

The “slice” syntax is a handy way to refer to sub-parts of a sequence of characters within an original string. The syntax for string slicing is,

The negative index can be used to access individual characters in a string. Negative indexing starts with −1 index corresponding to the last character in the string and then the index decreases by one as we move to the left.

Here separator is the delimiter string and is optional. A given string is split into list of strings based on the specified separator. If the separator is not specified then whitespace is considered as the delimiter string to separate the strings. If maxsplit is given, at most maxsplit splits are done (thus, the list will have at most maxsplit + 1 items). If maxsplit is not stated or −1, then there is no limit on the number of splits.

Since the string is a sequence of characters, each of these characters can be traversed using the for loop.

Example: Program to Demonstrate String Traversing Using the for Loop

Example: Program to Print the Characters Which Are Common in Two Strings

Example: Write Python Program to Count the Total Number of Vowels, Consonants and Blanks in a String

Example: Write Python Program to Calculate the Length of a String Without Using Built-In len() Function

A string can reversed using the built-in reversed() function, which takes a string and returns an iterator in reverse order.

reversed() can be wrapped in a call to ”.join() to make a python string from the iterator.

While using reversed() might be more readable to uninitiated Python users, using extended slicing with a step of -1 is faster and more concise. Here , try to implement it as function:

Python Operators Equal To, Greater Than Or Less Than, Not Equal To