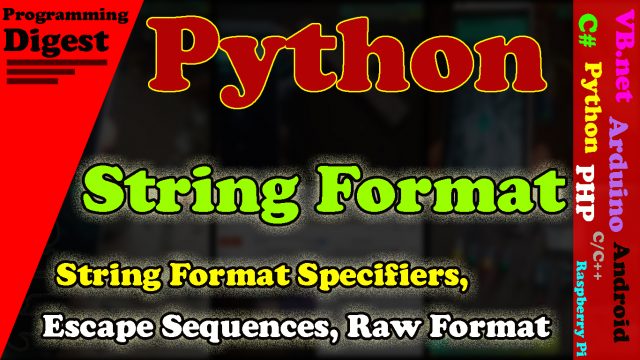 Python String Format-Python supports multiple ways to format text strings. These include %-formatting and str.format(). Each of these methods have their advantages, but in inclusion, have disadvantages that make them cumbersome to use in practice. A new python string format mechanism referred to as “f-strings” is becoming popular among Python community, taken from the leading character used to denote such python string format, and stands for “formatted strings”. The f-strings provide a way to embed expressions inside strings literals, using a minimal syntax. A python string format literal is what we see in the source code of a Python program, including the quotation marks. It should be noted that an f-string is really an expression evaluated at run time and not a constant value. In Python source code, an f-string is a literal string, prefixed with ‘f’, which contains expressions within curly braces ‘{‘ and ‘}’.

The f-strings formatting is driven by the desire to have a simpler way to format strings in Python. The existing ways of python string format are either error-prone, inflexible, or cumbersome. The %-formatting is limited as to the types it supports. Only int, str and doubles can be formatted. All other types are either not accepted or converted to one of these types before formatting. In addition, there’s a well-known trap when a single value is passed. For example,

it works well when a single value is passed. But if the variable almanac were ever to be a tuple, the same code would fail. For example,

Passing Multiple values not supported in %-formatting. The str.format() formatting was added to address some of these problems with %-formatting. In particular, it uses standard function call syntax and therefore supports

multiple parameters. However, str.format() is not without its issues. Chief among them is its verbosity. For example, in the following code, the text value is repeated.

Too much verbosity Even in its simplest form, there is a bit of boilerplate, and the value that’s inserted into

The statement is not informative. With an f-string, this becomes,

Backslashes are not supported within the curly braces when f-strings are used. You can use various type of quote inside the expression:

Use different types of quotes within and outside the curly braces.

The f character should be prefixed during f-string formatting. The string_statement is a string consisting of a sequence of characters. Within curly braces, you specify the variable_ name whose value will be displayed. Specifying width and precision values are optional. If they are specified, then both width and precision should be included within curly braces. Also, using variable_name along with either width or precision values should be separated by a colon. You can pad or create space around variable_name value element through width value. By delinquency, strings are left-justified and numbers are right-justified. Precision refers to the total number of digits that will be displayed in a number. This includes the decimal point and all the digits, i.e., before and after the decimal point. For example,

By placing a backslash (\) character at the end of the line, you can break a single line to multiple lines while ensuring continuation. It indicates that the next line is also part of the same statement. Print backslash by escaping the backslash itself. You can use the backslash (\) escape character to add single or double quotation marks in the python string format. The \n escape sequence is used to insert a new line without hitting the enter or return key. The part of the string after the \n escape sequence appears in the next line. A horizontal indentation is provided with the \t escape sequence. Inserts a carriage return in the string by moving all characters after \r to the beginning of the string by overriding the exact number of characters that were moved. The \b escape sequence removes the previous character. A 16-bit hex value Unicode character is inserted in the python string format. A character is inserted in the string based on its Octal 10 and Hex values.

A raw string is created by prefixing the character r to the string. In Python string format, a raw string ignores all types of formatting within a string including the escape characters.

As you can see in the output, by constructing a raw string you can retain quotes, backslashes that are used to escape, and other characters, as in.

Fundamentally, computers just deal with numbers. They save letters and other characters by assigning a number for each one. Before Unicode was created, there were hundreds of different systems, called character encodings for assigning these numbers. These early character encodings were limited and could not accommodate enough characters to cover all the world’s languages. Even for a simple language like English, no single encoding was adequate for all the letters, punctuation, and technical symbols in common use. The Unicode Standard provides a unique number for each character, no matter what platform, device, application, or language. It has been accepted by all modern software providers and now allows data to be transported through many different platforms, devices, and applications without corruption. Unicode can be implemented by different character encodings. The Unicode Standard defines Unicode Transformation Formats like UTF-8, UTF-16, and UTF-32, and several other encodings are in use. The most commonly used encodings are UTF-8, UTF-16, and UCS-2 (Universal Coded Character Set), a precursor of UTF-16. UTF-8 is dominantly used by websites (over 90%), uses one byte for the first 128 code points, and up to 4 bytes for other characters. The regular Python string format is not Unicode: they are just plain bytes. To create a Unicode string, use the ‘u’ prefix on the python string literal. For example,

Python String and how to use str(), Slicing and Joining, split(), Traversing