in this article, we will talk about what is variables in python? so basically variable is a container where you can put your values example we are storing 2 here in ‘a’ container and the name of that container is X of course you can give anything doesn’t matter you can say xyz, you can say a box you can give any name right so we can say

and the moment I pressed the enter now this is the first time when you pressed the enter and you have not got any output ,so in the earlier the prompts what we did is when we said any of any operation it was giving you some output here we have not got any output it’s just an assignment operation so in assignment what we do is we have a variable name equal to our value so we are assigning to to X, that works so  I do this now can I say

yes because in X we have a value which is 2, and when press the enter it will give the out which is

it works so we can say X has 2, y has 5 and we are adding them, so that’s why we can use them but why they’re called variables now normally when you say variable this term simply means you can change the value can be changed here can I say

can I change the value from 2 to 40 let’s try and then when I pressed the enter?

that means the value of x now is 40, so we can change the value and now we can justify that what is variable, it’s a box but it can have a value and we need to define the type of the variable you don’t need to so the moment I assign a value you can it automatically takes whatever value you are assigning so, in this case, it is integer now that let’s do this thing what if I say X and if I say enter what it will do so the moment you say X and enter it will print the value of x in this case which is 40, what if I use a variable xyz now, of course, we have not defined this variable right and we are still trying to use it for example

press Enter key I got an error 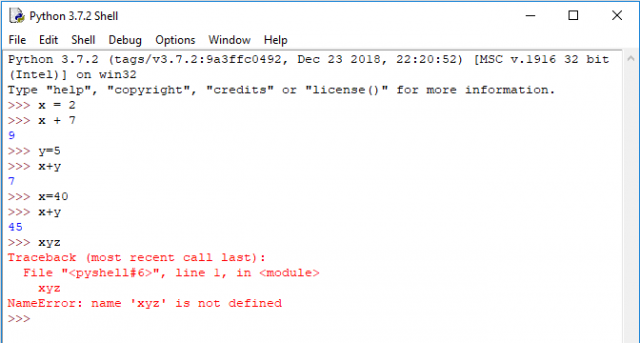 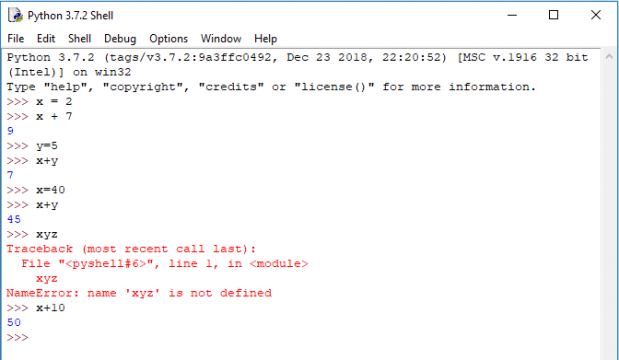 so, of course, it will give you 50 now what if I want to add 50 with y I mean something this is something in this way I would say

and if I pressed the enter 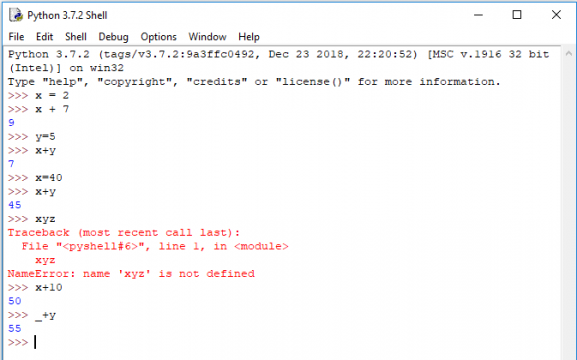 you can see a record 55 so it is 40 plus 5 which is 55. so this works right so this is amazing you know there are so many things you can work with this so we can use variables in python for numbers right so we can use it for float all integer.

not working so you have to make sure that you put plus( + ) there because if you have plus then put then only it will try to interpret that but there’s this one thing which is very fancy here you know so we talk about Fawad khan it’s a string, and it’s a combination of characters that means even if I want to fetch one character we should be able to do that, and yes we can do that so if I use name, and if I want to fetch one character how will I do that so let’s say if I have a Fawad khan, and Fawad khan has 9 letters or 9 characters if you break it down it will create an array or you can say a collection of characters the numbering starts with zero because normally in computer’s numbering always starts with zero so if I want to fetch it we have to use a square [ ] and you have to mention zero inside the square bracket

so we are specifying hey I want to fetch the first letter of names, in this case, it is F how it works so now I  fetch the last one which is 9, Fawad khan is basically 9 but I am using the one space between Fawad and khan so that why I  specifying the 10th index which 9  which is n 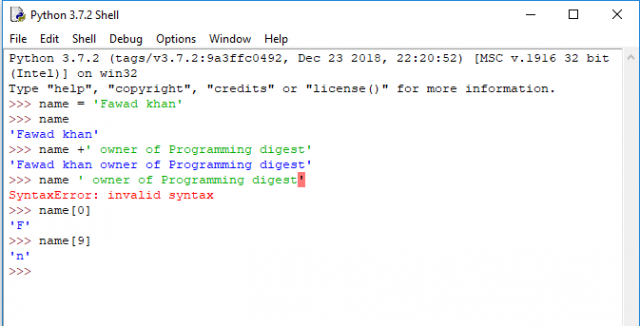 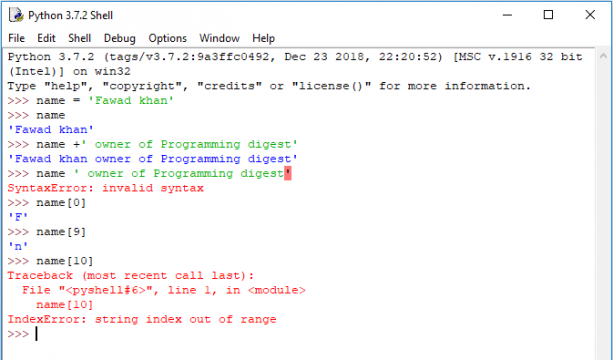 it says index error string index out of range, of course, you are going out of your limit, so you cannot do that.

What will happen when I use negative numbers, let’s try I am using[- 1]

so I want your guess here what you think what it will do come on think about it,  let’s see what happens so when I press enter

i got n, so the answer is when you put a negative number it will start from right to left, so it will start with the ending so which is ‘n’ in this case that means if I put [-2] it will give you the second last data which is ‘a’ 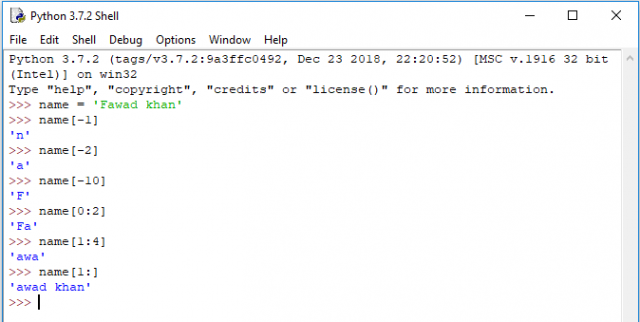 what if I specify the ending part but not the starting point example if I keep it blank and after colon, I will say 4  [:4] now in this case it will start with the first l letter ‘F’ and it will end at 3 which is before 4 which ‘w’. 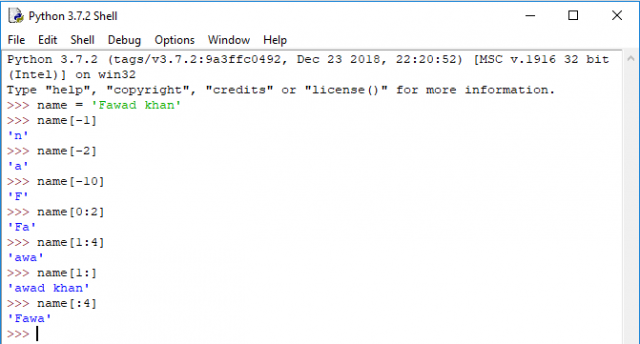 we don’t have 14 characters right now in this case it will end at the last one which is available so it will not give you any other at this case you can see we got Fawad khan, start with F, and then its end at ‘n’ because we don’t have any other character so if you don’t if you want to avoid errors this is one way. 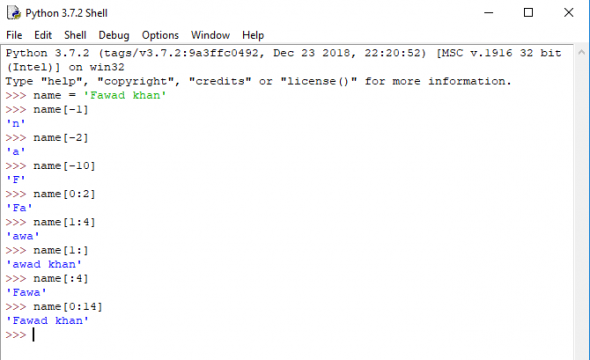 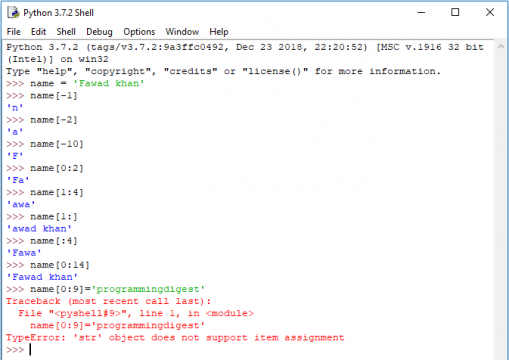 it says string object does not support item assignment, so the thing is once you assign the value you cannot change it not you want for one character if I say name[0] I want to change the first character to name[0]=’khan’, even this will not work you can see we got the error 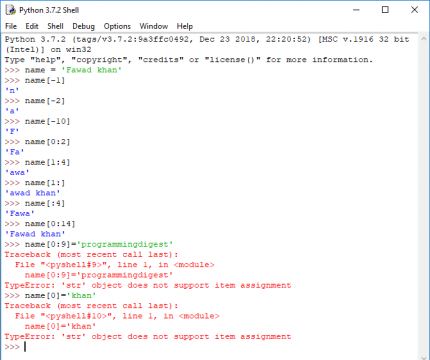 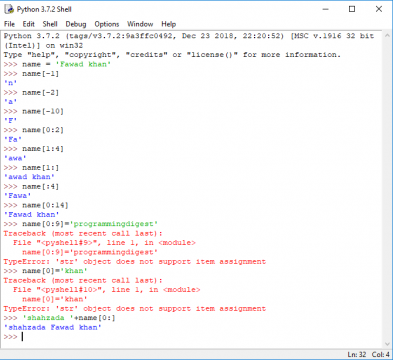