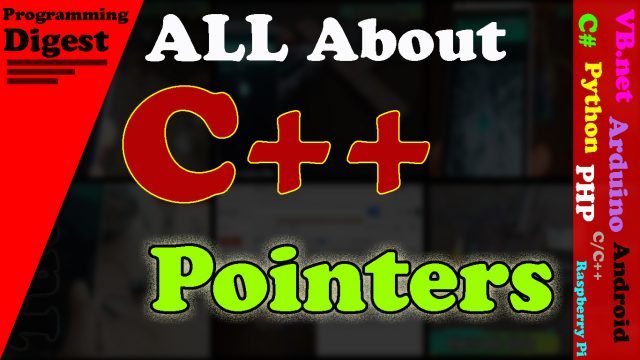 C++ pointers are one of the most powerful elements of the C/C++ language. It provides a way of accessing the variable. A pointer is a special variable that represents the location or address of another variable (rather than the value of a variable). Knowing the address of a variable enables you to set and query its value.

As you known that C/C++ is a mid-level language. It contains the low-level features as well. In low-level programming, we deal with the address of data frequently; for this pointers play a tremendous role.

Pointers can be useful for data transmission between a function and its reference point. A function can return only a single value, but through pointers, you can return multiple values from a function via function arguments. In short, pointers provide a convenient way to handle many such other activities.

The variable that is use to hold the memory address of another variable is called a pointer variable or simply a pointer.

For example, if a pointer variable “p” is to hold memory address of and integer variable, it is declared as

Similarly, if a pointer variable “rep” is to hold memory address of a floating point variable, it is declared as:

the above statement indicate that both “p” and “rep” variable are pointer variable and they can hold memory of integer and floating point variable respectively.

a pointer variable can also be used to access data of memory location to which it points.

The above declaration defines x as an integer variable holding value 5. But think for a moment, where x will be stored in computer memory? What will be the address of x? it would not be sufficient to know your friend’s name only, it would be better if you know his address too, because his address may be helpful for you in time of need. Like this, it you know the address of x. it would be handler to process the value of x.

now lets assign the address of the x to another variable say ptv as:

this new variable is known as pointer variable. Thus ptv represents x’s address, not its value. this is shown in the following figure.

The value stored in ptv memory location can be accessed by the expression *ptv. Where * is a unary operator, called ‘value at address’, operator. It returns the value stored at a particular address and operator and operates only on pointer variable. The value at address operator is also called indirection operator. Thus ptv and x both represent the same value. so any variable that is preceded by an asterisk ( * ) is known as a pointer variable. It has the following general format:

C++ also allows you to declare typed pointer by placing the asterisk after the name of the data type as shown it the following example:

its important to note that address of the variable will always be whole numbers. Thus pointer would always contain whole numbers.

Look at the following declarations

Example write a C++ program which stores the pointer value into another pointer variable:

Example write a C++ program that takes input from the user and print the value as well as pointer variable memory location:

the pointer variable “p” can hold the address of variable of any data type.

There is a close relationship between pointer and arrays. In advanced programming, array are accessed using pointers.

The array “x” is of type int and “p” is a pointer variable of  type int.

To store the starting address of array “x” (or the address of first element ). The following statement is used:

For example, the memory size of various data types is as shown below:

Example write a C++ program that takes input from the user into an array and find out the maximum value from the array through c++ pointer:

Passing Pointer as Arguments to Function:

Let me give you some practical examples.

Example write a C++ program which swaps two value by passing pointer arguments to the function:

Since a string is like an array, pointer variable can also be used to access it. For example:

Example write a C++ program which counts the length of the string using c++ pointers String :

c++ Pointers variable may also be declared as an array.

In the above example, the variable “country” is of type “pointer to character”. The four string (names of country) are initialized into it.

It the above variable is declared as:

It will fix 4 elements and each element will have a fixes length if 15 characters, including the null character. Each string will occupy 15 bytes in the computer memory even if the string is of a only one character. In this way a large amount of space is wasted. The storage in memory for country[4][15] is shown below.