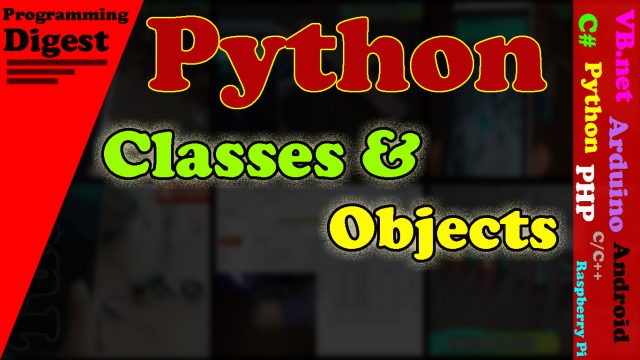 Related variables and methods are grouped together in python classes. The easiest  form of python classes definition looks like this:

Let’s define a python classes called Mobile  that has two methods associated with it one is receive_message() and another is send_message(). The first parameter in each of these methods is the word self. When self is used, it is just a variable name to which the object that was created based on a python classes is assigned. In the method definition, self doesn’t need to be the only parameter and it can have multiple parameters. Creating the Mobile class provided us with a blueprint for an object. Just because you have defined a python classes doesn’t mean you have created any Mobile objects. Often, the first argument of a function is called self. This is nothing more than a assembly: the name self has absolutely no special meaning to Python. However, by not following this convention, your code may be less readable to other Python programmers.

The syntax to assign value to data attribute is,

where value can be of integer, float, string types, or another object itself.

The syntax to call method attribute is,

Valid attribute names are all the names that were inside the python classes when the objects for the python classes was created. The connection between the attributes with the object is indicated by a “dot” (“.”) written between them with object_name on left and attribute_name on right. For example, in the expression z.real = 10, real is an data attribute of the object z and is assigned a value of 10. In the expression cow.domesticated(), the domesticated() is a method attribute of the cow object.

The syntax for Python classes instantiation is,

parentheses () as if it were a function, nokia = Mobile(). The above expression creates a new object for the python classes ClassName and assigns this object to the variable object_name.

You may have noticed that both of these method definitions have self as the first parameter. This self variable can also be used inside the method bodies, but you do not appear to pass this as an argument in the method called using the object. This is because whenever you call a method using an object, the object itself is automatically passed in as the first parameter to the self parameter variable. The remaining parameter variables must be supplied as arguments in the calling method. The object nokia calls two methods in the main() function of the program, causing those methods to run. Python raises an exception when a method that requires an argument is called without any, even if the argument is not actually used.

Multiple objects for a python classes can be created while attaching a unique copy of data attributes and methods of the python classes to each of these objects.

Example: Program to Illustrate the Creation of Multiple Objects for Python classes:

Here, three objects, vulture, crane, and emu, are created for the Birds class. All of these objects belong to the same python classes, so they have the same data attribute but different values for each of those data attributes. Objects can also have their own methods to operate on their data attributes. A method is always begot relative to some object of its python classes. During object instantiation, each object receives a unique copy of data attribute and method is bundled together. This  guarantees that correct data attributes and methods are used that are specific to a particular object. The self variable is initialized with the particular object of the python classes that is created during instantiation  and the parameters of __init__() constructor is initialized with the arguments passed on to that python classes object . Now we have three objects whose data attributes have different values. In this case, vulture.flying_birds() will output “Griffon Vulture flies above clouds,” crane.flyingbirds() will output “Common Crane flies above cloud,” and emu.non_flying_birds() will output “Emu is the national bird of Australia” – . Notice the use of bird_name in and. Even though they have the same name, they are unique. The bird_name in __init__() method definition header is used as a parameter while the bird_name referenced by self within the method is an instance variable.

Example: Define a Python class Called Cart that Contains Data Attributes Apples and Oranges. Write Methods that Return Appropriate Messages If the Number of Apples is Greater than 5 or When the Number of Oranges are Greater than 10.

Example: Program to Demonstrate the Use of Default Parameters in Methods

An object can be passed to a calling function as an argument.

Example: Program to Demonstrate Passing of an Object as an Argument to a Function Call

It is important to note that everything in Python is an object, including classes. In Python, “everything is an object” (that is, all values are objects) because Python does not include any primitive, unboxed values. Anything that can be used as a value (int, str, float, functions, modules, etc.) is implemented as an object. The id() function is used to find the identity of the location of the object in memory. The syntax for id() function is,

This function returns the “identity” of an object. This is an integer (or long integer), which is guaranteed to be unique and constant for this object during its lifetime. Two objects with non-overlapping lifetimes may have the same id() value. You can check whether an object is an instance of a given python classes or not by using the

Example: Given the Coordinates (x, y) of a Center of a Circle and Its Radius, Write Python Program to Determine Whether the Point Lies Inside the Circle, On the Circle or Outside the Circle

The point object is used to invoke check_point_status() method. This check_point_status() method returns the self object itself. The returned_object variable is used to store the returned object . Both point and returned_object are used to store an instance of the same python classes – and they point to the same location in memory, which is why their values are the same.

Example: Write the Pythonic Program to Compute the End Time of an Opera, While Start Time and Duration are Given

In the Time class, three data attributes, hours, minutes and seconds, are added. The add_time() method is invoked using opera_start object, while the opera_duration object is passed as an argument – . In the add_time() method, self parameter is assigned with the opera_start object, and duration parameter is assigned with opera_duration object. The hours, minutes, and seconds data attributes attached to both of these objects are added and assigned to opera_hours, opera_minutes, and opera_seconds variables. While the total duration of opera_seconds variable is greater than sixty, the decrement of opera_ seconds is done by a value of sixty and increment opera_minutes by one. While the total duration of the opera_ minutes variable is greater than sixty, then decrement opera_ minutes by a value of sixty and increment the opera_hours by one. Finally, print the opera end time.